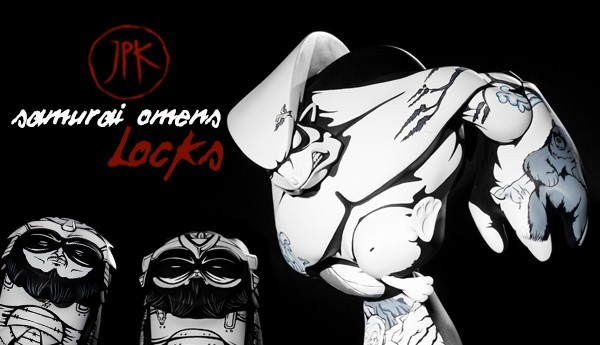 It has been a good year for JPK, seeing plenty of custom Coarse pieces from him and all have been fantastic to look at. Recently he has been commissioned to do a pair of Coarse Omens and another as a perfect gift for his very good friend Justin Allfree who takes all of JPK photography for him and this piece was given to him as a thank-you for all his help, guidance and amazing photography over the last year. Using the Locks platform as a canvas to tell a nice story JPK adds dashes of colour just to lift out the art even more. Keeping intact the Locks face.

Coarse Locks figure that I painted as both a character and a scene, depicting a monk passing through a narrow valley  in the woods, a look of serenity on his face. Across the valley a bear stands when he hears the monks passing, but for now everything is at peace.

Even the clouds he has just a pointillism style adding a textured feel to it which for me was also a nice contrast to the work. These are a set of two 3.5″ Omens and  are a private commission buy a fellow Coarse head collector (Hokiardi Adhi) . The theme was left open to JPK, but the client did mention a few of JPK‘s previous pieces he liked as guidance, so JPK went with a pair of robust-looking samurai. The photography, as per tradition, is by Justin Allfree – another great job and well worth a follow on Twitter!