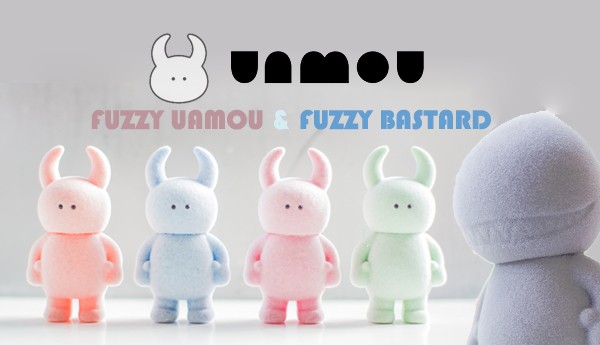 Uamou’s FUZZY UAMOU & FUZZY BASTARD are ready to set the worlds hearts melting with their cuteness. the special edition flocked Uamou figures come in a variety of new colours! Find Fuzzy Uamou in Orange, Pink, Green and Blue. Bastard is released in White, Orange, Pink, Green, Blue and Grey! all in a pastel tones. During winter, Uamou grows a thick and fluffy fur to cope with the harsh cold and even though his natural instinct tells him to go into hibernation, he continues to meet up with Boo who seems unaffected by the seasons.

If you are interested simply email [email protected]  and visit http://uamou.com/online-shop/

It is a rainy day as we arrive at a quiet outside station of Tokyo. Normally it is a 15 minute walk to the paint-shop but Ayako tells me that Master Goto will pick us up with his car because he is worried about the bad weather. This was going to be the first time I was going to meet the legendary master-painter and I had been looking forward to it for a long time. From around the corner a small cubic vehicle approaches, inside, one of the kindest smiles inviting us to get in the car. Master Goto is known for the amazing paint work he does for Studio Uamou and many other independent outlets. Ayako and Master Goto have been working closely together for years and without fail he gives form to the many ideas that Ayako brings to him. He mostly keeps to himself and works fulltime in a battered little shed behind his house. “I recently fixed the roof!” he reassures us with a big smile as we step inside. His workshop is small and dark. Apart from a table and two chairs reserved for his customers the entire studio is cluttered with boxes, cans of paint and blank toys. Behind a small counter Master goto sits down on the floor where he takes orders, not much unlike a barman but in this case instead of mixing drinks he mixes paint. This is the place where he painted for half a century and it is no exaggeration that there are almost a million people out there who own something that has been painted by Master Goto. Master goto has been painting for over 50 years and he learned the trade from his father when he was young. Dad was a toy maker, way back when Japanese toys were still made from celluloid instead of soft vinyl and of course he would paint all of his creations by hand. The toy work shop would be the environment where Goto grew up in, developing a sensibility for colours and a remarkable talent for mixing paint. It was clear that he would grow up to become a painter himself. After taking up various jobs on commission he found himself painting endless quantities of Godzillas, Mickey Mouses and other famous licensed characters and he still continues to do so fifty years later. It is easy to see that this man enjoys his work with heart and soul and his dedication is accompanied by a soft natural smile that never seems to leave his face. We spend the afternoon chatting and laughing and thinking about what colours we would like to use for our next series of figures. Despite the roof being fixed, every once in a while a single drop of rain seeps through to hit me on the head. All the while, Master Goto continues his work smiling.

(all info lifted from UAMOU.com)