New world order is coming! With the dark times in the world right now chknhead and FLABSLAB for the non-law abiding citizen with Flippin’ the Bird! 12 hours from now, pre-order for the Flippin’ the Bird [Mono] Like we said previously, FLABSLAB’s first collab with Chknhead from the Philippines ( we doubt it would be the last). Chicken obsessed Manila-based illustrator and designer at Evil Genius Clothing Co, Creon Chkn Head has created his first resin figure! “Flippin’ the Bird”. Now the big boy is here! Darn naughty birds took a while to be cooked. You’ve seen the mini OG Flippin’ the Bird By Creon Chkn Head and here’s the big brother, but now in a MONO edition!

The 2nd colorway of FLABSLAB first collaboration with Chknhead from the Philippines. Pics shown are of the prototype and final production piece may have slight variations. 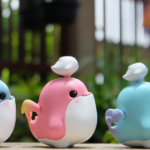 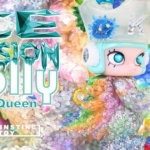