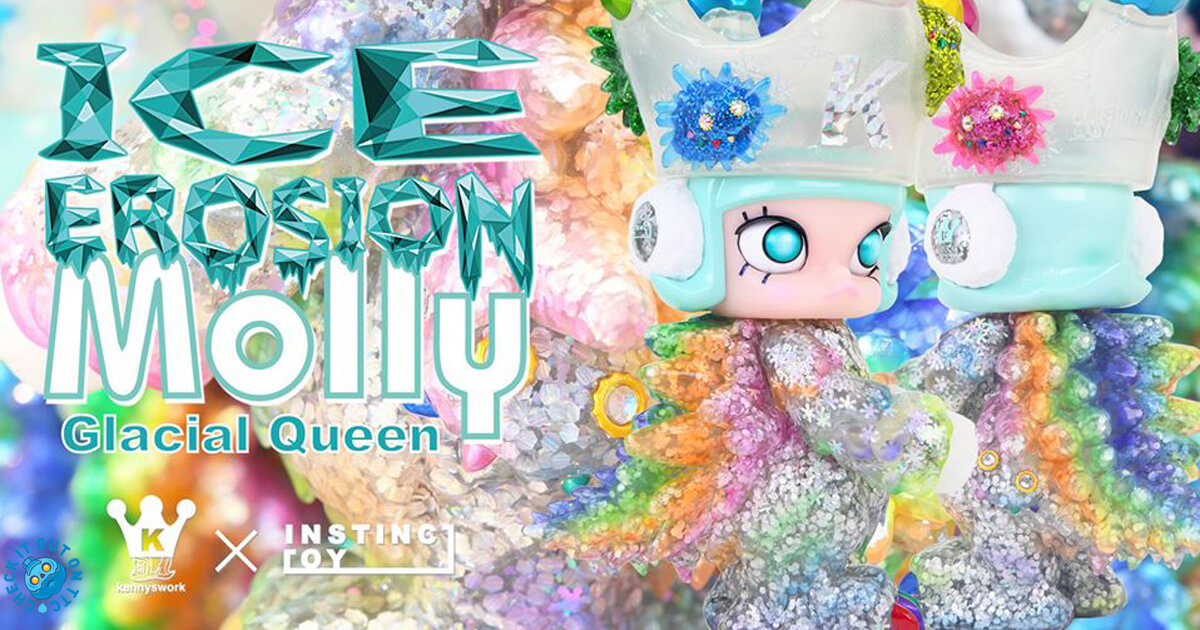 As promised, Glacial Queen Erosion Molly by Kenny Wong x INSTINCTOY Release details have arrived! Like we said previously HERE, Let’s be honest, there’s no need for an introduction to Kenny Wong x INSTINCTOY Erosion Molly, right? Kenny Wong x INSTINCTOY are proud to announce the latest Glacial Queen, almost 2 years since the last release and this version was inspired by an image of an “Ice Queen”. The crown is made of clear phosphorescent soft vinyl, and for the body, ice crystal glitter was mixed into the material. This time again, the release takes place one year after the initial announcement. Time to add some sparkle in your collection, your chance has come to finally owning an EROSION MOLLY. Plus this beauty GLOWS IN THE DARK. Now, the 3rd colour “Glacial Queen” has finally arrived.

Even the “earmuffs” are molded with snow crystal glitter ! Of course, the white parts of the earmuffs are also coated with “flocky” material to make them appear soft and fluffy.

Taking advantage of the detailed part division structure, we performed part molding to change the glitter color of each part. On the crown alone we used 4 different colors of glitter.

This version was first exhibited at the INSTINCTOY booth of TTE2019 (Thailand Toy Expo) held in Thailand during last year’s May, and we got to see it in person!

ICE EROSION MOLLY is one of INSTINCTOY’s “high quality soft vinyl” figures, consisting of 19 parts (+10 crystals). The crown and both hands glow in the dark. Because the distribution of the phosphorescent powder is about 40%, the crown glows while still having the clarity of ice. The ICE LIQUIDs on the crown also look fantastic in the dark. In addition, both hands emit high-luminance phosphorescent light, revealing glitter snowflakes on both arms in the dark. In that regard, it is also important to point out that only snowflake glitter is used in both arms to create this particular effect.

The sales price of the previous work and 2nd colour was 25,500 JPY including tax. However, as mentioned above, using 6 types of glitter and phosphorescent material for the separated parts, the number of production steps during moulding and an increase in the defective rate etc. greatly affected the production of this work, and therefore the production cost also increased significantly. As a result, a sales price increase of 1,500 JPY including tax compared to the previous colourways could not be avoided. Therefore, the selling price of the 3rd colour will be 27,000 JPY including tax. Instinctoy kindly ask for your understanding.

Please follow this link to apply for the lottery↓