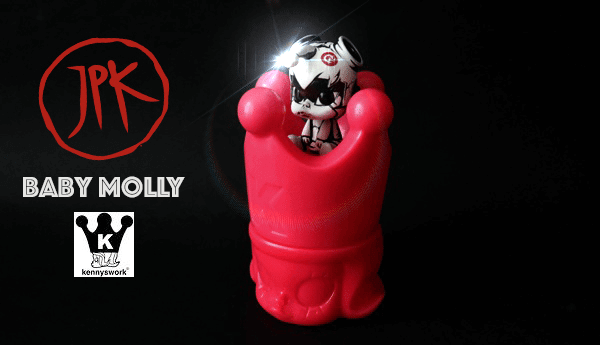 Jon-Paul Kaiser had a mammoth task of customising Kenny Wong’s baby Molly recently. Not only was the baby Molly was a small 2″inch figure it was made out of a very sticky and rubbery texture. JPK of course was still up to the task in making a mark on Kenny Wong’s Molly. Originally the blind box series was released at TTF (Taipei Toy Festival 2014). Baby Molly came with an impressive outer casing for the blind box series which was in the shape of a Molly head. That itself was worth getting the series.

JPK adds hints of Star Wars X-Fighter incorporated into Molly’s helmet which we adore. If you ever had doubts about JPK doing cute customs then think again.

The original was in a all brown/copper colour which didn’t do the figure any justice and possibly the worst variation in the series. So having JPK work his magic giving Molly more depth and character to an already great platform. Usually Kenny has bright pastel like colour selection, but JPK totally flips it around and goes what he does best, hits you with the black and white. JPK adds a glow in the dark paint on Mollys antenna which glows bright at night, but sadly the poop camera couldn’t take decent shot so you will have to take JPK’s word for it. So as you would of gathered, this was a commission Baby Molly, but if you need a custom, hit JPK via http://www.jonpaulkaiser.com/ Facebook , Twitter  and Instagram.