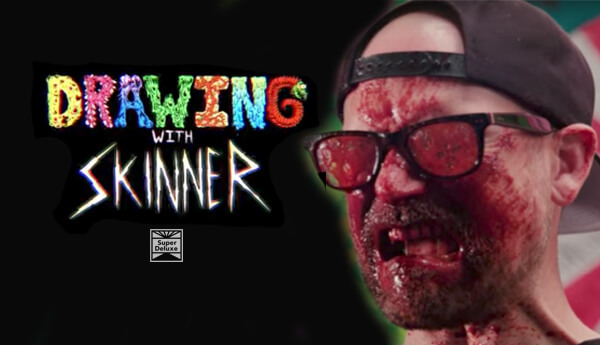 Right when you’re looking for some entertainment and there ain’t shit worth watching, the one and only SKINNER rolls out a YouTube show! Ain’t shitting you and it looks freaking awesome already as well a well-produced show already. SKINNER joins the Super Deluxe channel and here’s the first episode to pull you into subscribing.

Oakland artist Skinner, known for his heavy metal album covers and psychedelic murals, welcomes guest the Gaslamp Killer to paint their hallucinations in the premiere episode of Drawing with Skinner.

Super Deluxe is an entertainment company committed to amplifying creative voices that live just outside the mainstream.

Subscribe for original shorts, series, animations, and more things that are, as one of our beloved commenters put it, “Always weird to watch but hard to look away.” –Super Deluxe

(all info and media ripped off Super Deluxe and SKINNER)