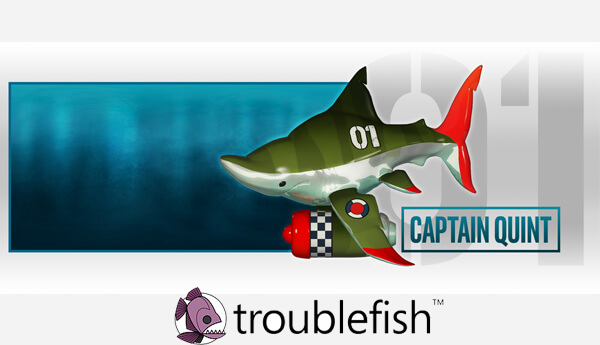 Do you have the love for sharks? Thomas Troisch over at “Troublefish” are ready to launch a Kickstarter campaign. A very interesting concept indeed. Mixing Sharks with air combat! Plenty of rewards and incentives. Troublefish have announced that they will team up with the guy over at POBBER if the project gets funded and made into a Vinyl toy. Good choice as POBBER have a track record of good QC. The Kickstarter has officially launched now! We will let Thomas to give you the lowdown.

“Capt QUINT is the first in a new series of collectible 8-inch toys, nautically-themed and retro-styled, by Savannah-based Thomas Troisch, aka Troublefish. Crediting his name to the ill-fated shark hunter of Steven Spielberg’s 1975 JAWS, Capt QUINT is inspired by the distinct lines of legendary comic book artist Hergé, the iconic designs and vivid markings from the golden age of aviation, and mankind’s inherent fascination with sharks.” 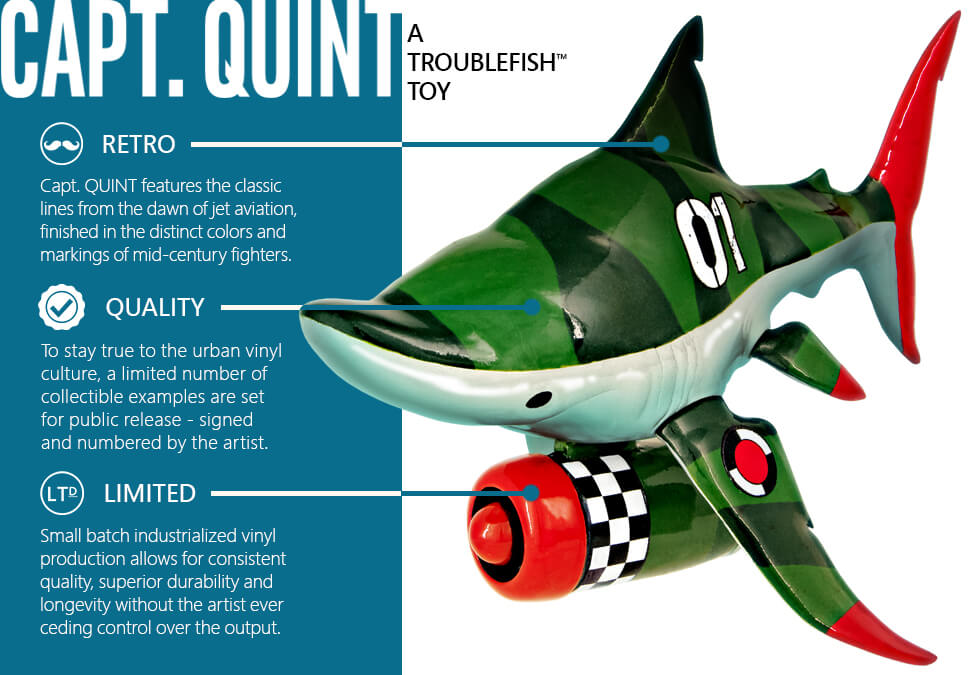 Captain (Capt.) QUINT is a limited production, eight-inch vinyl designer toy designed by Thomas Troisch. He is the very first in a series of nautical-themed, mid-century technology inspired, retro-styled collectible toys. Launching in 2016 with the Late War Camouflage, additional special editions, previewed below, will be announced throughout the year. 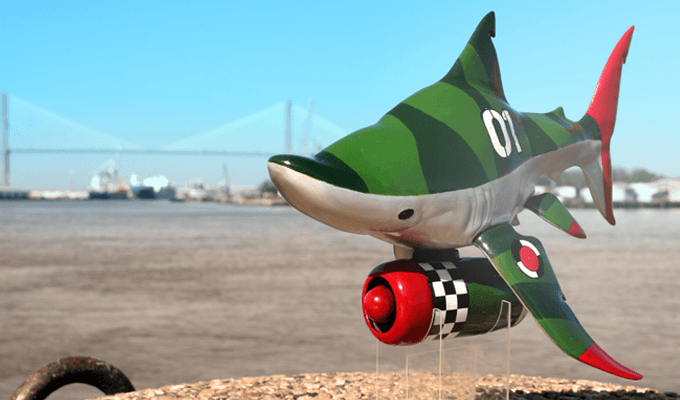 Capt QUINT is a limited edition vinyl designer toy. He’s eight inches long, stylized, and also happens to be a great white shark. His name is ironically credited to the ill-fated shark hunter (portrayed by the late Robert Shaw) of Steven Spielberg’s 1975 Jaws.

Featuring the classic lines from the dawn of jet aviation, Capt QUINT is finished in the distinct colors and markings of mid-century fighters. Troisch has researched the nuances of designer toy production, and gravitated towards the largely industrialized vinyl production, allowing for consistent quality, superior durability, and longevity, without the artist ever surrendering control over the output. To stay true to the urban vinyl culture, a limited number of collectible pieces are scheduled for public release.
A little bit about Capt QUINT’s designer. . .

Thomas Troisch began his professional journey in Seattle, starting with a degree in marine biology and turning to a career in creativity. From entertainment to advertising, Thomas worked as a production artist, corporate designer, and creative director for many companies, including Disney, Microsoft, and Nintendo. His experiences, coupled with a lifelong love of sci-fi, horror, and collectible toys, have allowed Thomas to focus all of his passion on establishing and maintaining his nascent brand.