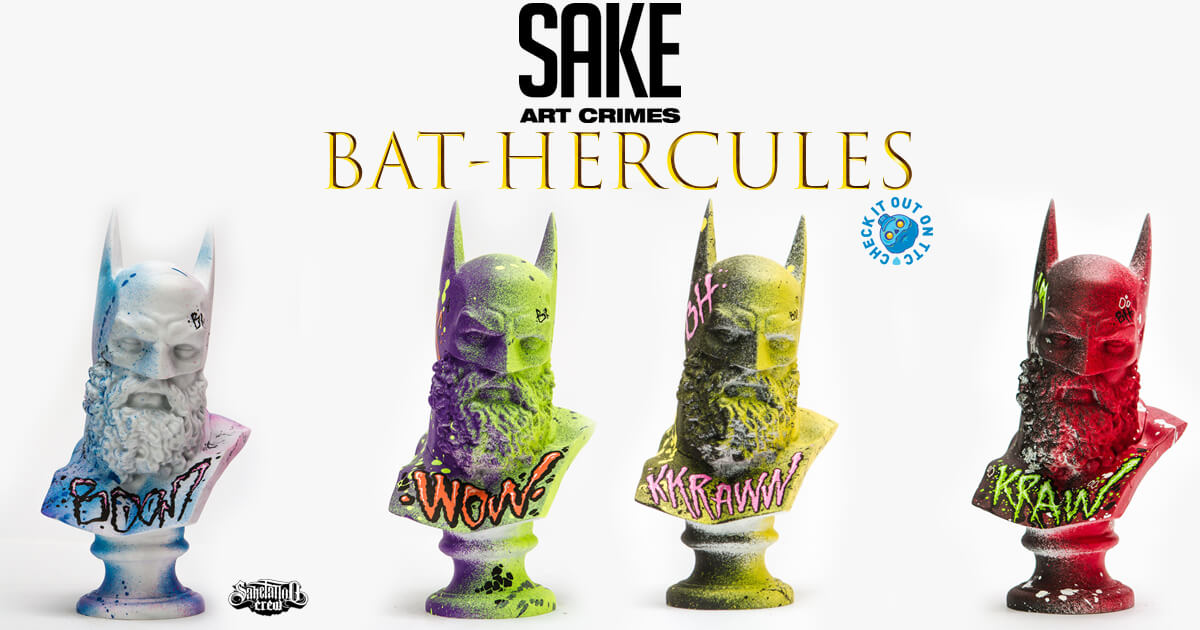 If The WEAPON X-ZEUS wasn’t enough for you all, hows about SAKE Art Crimes “Bat-Hercules” With the downfall of the roman bat empire,  Hercules was the son of Zeus, king of the gods, and the mortal woman Alcmene now SAKE Art Crimes has revealed he had a dark tail undiscovered until NOW, the first-ever caped crusader? Who knows, all we know is Bat-Hercules has been UNEARTHED and SAKE Art Crimes of already reshaping the history books! Greece based artist has now made DC comics scramble to re-write their comics as this beauty has been found! Ok so that’s totally fake news but what is real is the fact SAKE has made and designed “Bat-Hercules” all in SAKE signature style embedded in Roman mythology and history.

Like we said previously, Busts are not really a TTC thing but these from SAKE Art Crimes have totally changed our minds. Makes a great center piece for sure right?

When the graffiti scene was born in Athens on the early 90s, Sake was one of it’s most leading artists. He was known for the realistic approach in his graffiti art, which was groundbreaking for that foggy era. In the early 2000s, his creativity was expressed in a new genre of art for Greece back then, the art of tattooing.

Within the next 15 years he managed to establish the biggest tattoo studio in Europe and be the teacher to some of the top tattoo artists worldwide. In 2017, due to his nostalgia for graffiti and his beginning, he brings to life a new project called ”Statue Art Crimes” which consist of a modern approach in classic and monumental ancient bust and sculptures.