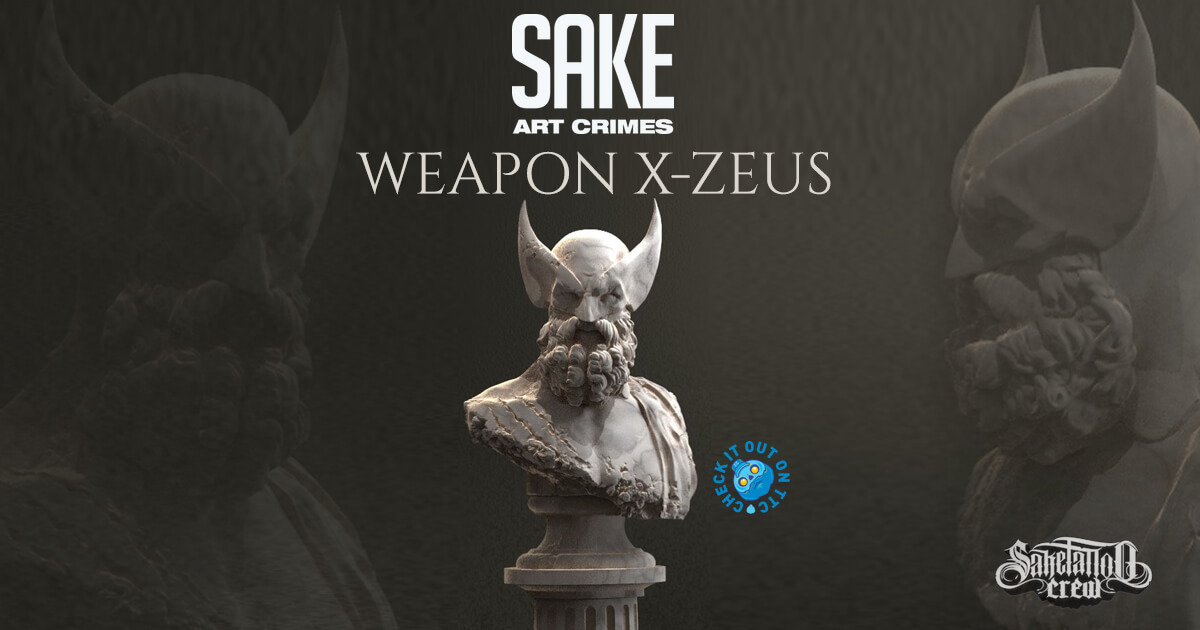 UNEARTHED and SAKE Art Crimes of already reshaping the history books! Greece based artist has now made Marvel scramble to re-write their comics as this beauty has been found! Ok so that’s totally fake news but what is real is the fact SAKE has made and designed “The WEAPON X-ZEUS” all in SAKE signature style embedded in Greek mythology and history.

Descending from the Titans

Zeus was the king of the Olympian gods, son of Cronos and Rhea. At some point, Cronos was ginen a prophecy that one of his children would overthrow him so he ate each of them as they were born.

When Zeus was born his mother instead of giving the infant to be eaten, she tricked Cronos into eating a stone. Zeus grew to adulthood and then plotted his revenge.

With the help of his siblings, the Cyclops and the Giants, Zeus went to a ten year war against Cronos and the Titans. During these years Zeus mastered his healing ability, his transformation ability and the ability to weild his energy-manipulating powers.

It is said that during the final battle with Cronos, Zeus transformed into a wolverine. The fierce and aggressive animal with the ability to kill much larger enemies and the reputation of ferocity and strength out of proportion to its size. He used his long claws to blind one of Cronos’ eyes and finally enslave him.

Busts are not really a TTC thing but these from SAKE Art Crimes have totally changed our minds. Makes a great center piece for sure right?

25 preorder pieces are available, they will come with a unique ballpoint artwork by Sake and signed by Sake!

WHERE: For preorder send email to [email protected]

The cost is 390€ includes shipping worldwide!

When the graffiti scene was born in Athens on the early 90s, Sake was one of it’s most leading artists. He was known for the realistic approach in his graffiti art, which was groundbreaking for that foggy era. In the early 2000s, his creativity was expressed in a new genre of art for Greece back then, the art of tattooing.

Within the next 15 years he managed to establish the biggest tattoo studio in Europe and be the teacher to some of the top tattoo artists worldwide. In 2017, due to his nostalgia for graffiti and his beginning, he brings to life a new project called ”Statue Art Crimes” which consist of a modern approach in classic and monumental ancient bust and sculptures.