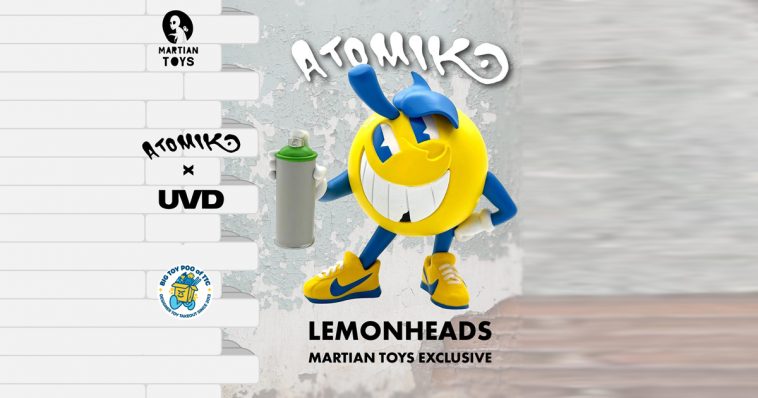 You’ve worn the shirts collected the merch! seen the murals, now UVD Toys and Miami artist “ATOMIK” is bringing you another huge dose of VitC as they present to you the OG Atomik LEMONHEAD designer vinyl art collectable. This week you will be able to own Atomik LEMONHEAD and add it to your collection whilst seeing Atomik Orange in a different format bringing a 3D vinyl into your home as a Martian Toys EXCLUSIVE for ComplexCon 2021. Bring some added zest to ComplexCon where Martian Toys are BRINGING THE WHOLE FLEET under one booth!

This 4″ vinyl figure is based on his famous Orange turned lemon that can be seen before on the streets of Miami and around the world! The figure holding a spray can come in LEMONHEAD colourway and features the iconic chipped tooth smile.

Atomik is a 100 per cent Miami artist. Atomik, trained in graphic design, is a big name in the Miami art scene. The graffiti legend, part of the infamous MSG crew, a group of local graffiti heroes, has been painting the city for quite some time. While growing up in the emerging Miami graffiti scene of the 80’s, Atomik witnessed for himself at a young age what would later become his profession. Famous for his iconic orange character which emerged as a response to the demolition of the Miami Orange Bowl ,the artists also marks the walls of Miami with his sleek hand-styles, graffiti and lettering. While painting for almost 20 years, Atomik’s playful characters and hand styles have become as much a symbol of Miami as are palm trees or neon lights. His unmistakable orange character has been placed all over the world bringing a piece of Miami to places such as Chile, Peru, Colombia, Brazil, Argentina, Mexico, Holland, Germany, Italy, Spain, England, Australia, Korea, and Thailand. His studio pieces on media ranging from canvas to paper as well as found objects like street signs, directly reflect his street work and usually feature his ubiquitous orange character. Atomik currently lives and works in Miami.

Text written by Joel at www.tidemiami.com. 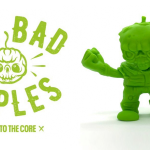 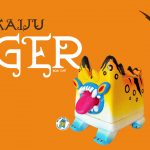