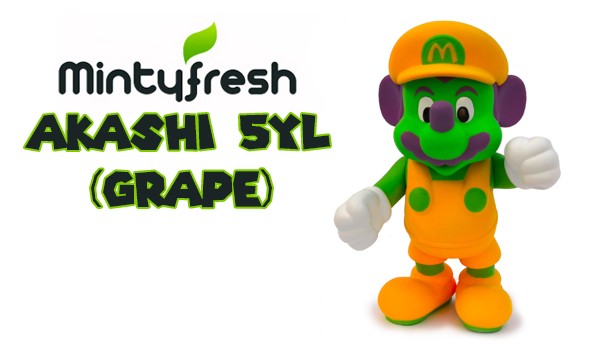 This is Akashi 5YL (Grape) figure (a Mintyfresh Exclusive) designed by Dave Bondi. From artist Dave Bondi comes Akashi 5yl – a brand new take on the vinyl toy he originally created in 2008. Following the success of sold- out exclusive colorways at SDCC and NYCC in 2013, the standard edition of Akashi 5yl is now ready to hit the shelves. The 8″ figure is highly poseable with seven points of articulation, a removable hat, an additional set of hands, and replaceable eyes with heart shaped pupils.

“I love these guys and it just made sense to mash them up. Mickey represents all the cartoon characters that I worshiped as a kid – Bugs, Daffy, Chip & Dale and dozens of others. They made me want to draw and inspired me to one day become an animator. I also remember the first time I played Donkey Kong and how amazing it was that a video game could be more than just a spaceship shooting a pixel. Mario had personality and you could make him jump and run around. I knew at age 12 that I also wanted to create video games. So Akashi is in a sense a “thank you” to them and also a bit of a self portrait.”

The Akashi 5YL (Grape) by Dave Bondi is limited to 50 pieces worldwide and is available now over on the Mintyfresh website here for a price of 54.95euro!

About Dave Bondi
Dave Bondi’s varied artistic talents have led him on a meandering career path. He is a fifteen year veteran of the animation and video game industry having worked for such notable entertainment companies as Electronic Arts, Disney, Activision, Mattel and the television show “SouthPark”. His work spans a broad range of disciplines, ranging from traditional sculpture to highly technical media.