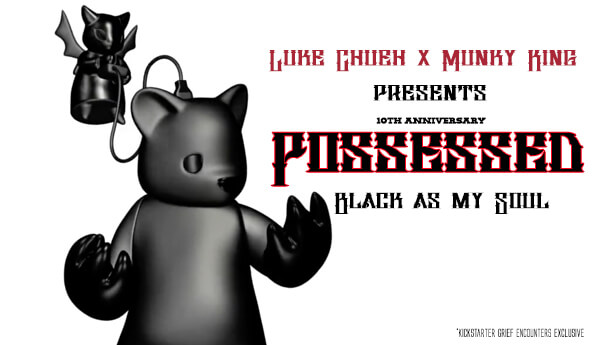 This exclusive black on black colorway of this 10th Anniversary edition is available only to Grief Encounters Kickstarter backers.

It’s been 10 years since the release of Possessed, serial number MK001, Munky King’s iconic toy with Luke Chueh. Now remoulded, with all the subtle changes we wished we did the first time while staying true to the original – carved in features, two articulated arms, and improved design to address prior spinning devil issues. Possessed Black will be a toy built to last. Possessed Black includes two figures made in rotocast vinyl. As a bonus, Luke Chueh will hand-embellish each box.

To back the Kickstarter and full details on the project visit  http://kck.st/2tktRa5