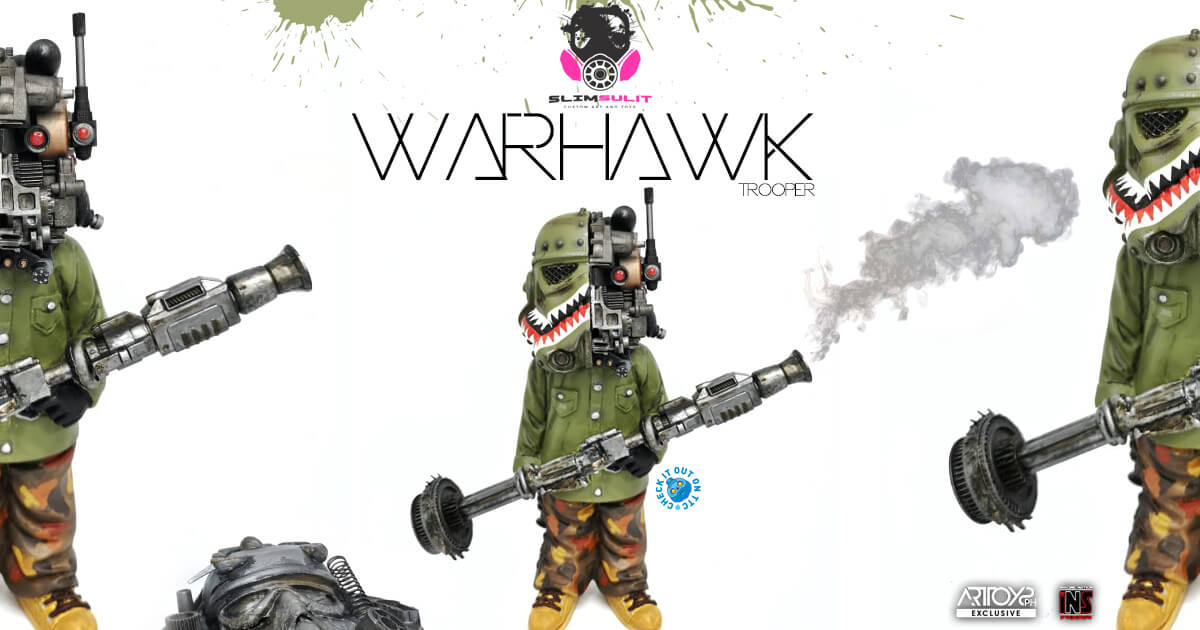 Art Toys PH x ImagineNation DesignStudios The Lost Legion: a trooper boy custom show happening really soon it was destiny that our buddy Ej Sulit would be summoned to take part in the show. Flexing his custom skills as well his love for Star Wars as he presents to you Warhawk Trooper! using Trooperboy by ImagineNation DesignStudios as a canvas Ej Sulit war-hungry trooper! Ej Sulit homing in on his sculpting and weathering skills with Warhawk Trooper. WARNING some crazy looking weaponry so much so MAD MAX would be jealous, HA.

Back Story of the piece: It was midnight in the Galactic Empire when the Troops were attacked by enemy soldiers coming from the Far East. In the chaos that ensued, “Warhawk” gets separated from his troops, leading to his capture. Blindfolded and beaten, they brought him to an unfamiliar island called Nguyacow. Slowly, he wakes up, his head covered with a dark black sheet, his hands cuffed to a steel platform.

From a sheer opening on the cloth strewn over his head, he sees machine parts and metal particles scattered all around him. With all his strength, he manages to break free from the cuffs that bound him. He slowly removes the dark cover on his head and as the light catches his eye, he sees a glimmer of his own reflection from the oil dripping on the wall… He lets out a piercing scream.

Warhawk is now half trooper, half machine. One side of his face is made up of materials and metal parts never before seen on this planet, the other half a remnant of the identity he once owned. He feels new and raw power surging from the part of him that has now turned into a machine. And with this renewed might, he swore to search for answers and to find the people responsible for doing this to him…

Fun fact! Trooper Boy was launched back in 2013 at Secret Fresh. Aside from the toy launch, INS had a custom show as well, wherein they invited artists to customize blank Stormtrooper heads as their canvass.

Following that year, they launched Vader Boy as their second character, Fettboy, C-3PBoy and Spray2d2 were also added to the crew later on. And the family grew from there. Aside from the OG’s, they were fortunate to do a couple of collaborations with Flabslab, and Bait, to name a few; and also launched the Mini Trooper Boy line.

Not fans of designer toys with bases? Don’t worry as much as Warhawk Trooper base looks great you have the option to use it as its removable! Win win.