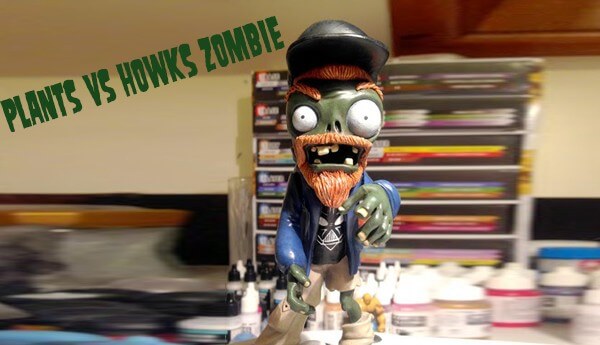 Customiser Howks has customised Zombie from one of the most addictive and big cult following Plants Vs Zombies. The figure was created as a birthday present for a good friend of Howks, using an existing base figure, Milliput (a two part epoxy putty) and Green Stuff (by Kneadatite) which Howks painted using a mix of Vallejo model colour paints and Games Workshop Citadel paints. Putting his own twists on the Zombie.

look a little more like my friend. I basically added facial hair (beard, moustache, eyebrows), his hair underneath his favourite flat peak hat, the hat itself ( I even went as far to paint the Vans logo onto it) and his little ponytail too.

The standard figure is wearing a shirt an tie under a coat/blazer and smart casual shoes which is not the typical wardrobe that my mate wears so I used a dremel to remove the cuffs of the jacket, the sole of the trainers and to reshape them and then to remove the tie and collar before re-sculpting them all to look like a t-shirt, a hoodie and trainers. On painting the final model I had to add a Star Wars reference in there too so I painted Vader’s mask on to his tee.

Howks on his own blog gives a simple guide and a few tips on the process of the making of the Zombie, which would help anyone starting to customise. Check out more details http://howkerdoodle.blogspot.co.uk/   and see how the Zombie was born. Overall this custom is pretty cool and I am sure his friend did look too much like this… maybe after his birthday party hangover!

Keep tabs on Howks via http://www.howks.co.uk/ , Twitter and Instagram and just got the news that Howks has re-opened his commission list whoop whoop, you better get on it before it shuts again.