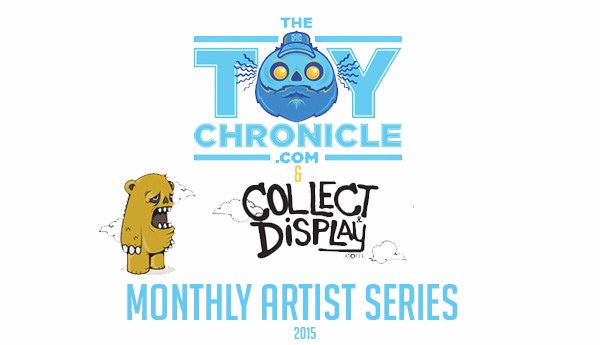 last years Collect & Display ‘Monthly Custom Series’ went down a treat and this year we have have teamed up with Collect & Display to bring you eleven new artists series for 2015. You are all in for a treat every month with a specially selected artist giving you a range of special art toy! The line up of artist includes

Artist from the UK – From a young age I have had a strong interest in drawing animals and monsters from my imagination. Many afternoons and Saturday mornings were spent watching cartoons which have all strongly influenced my art and style, filled with quirky and unusual characters. Below is a few WIP shots for the Pj’s series for this month!

You can keep tabs on Pj Constable’s work Via Instagram Twitter and check out his Online shop for some of this outstanding work for sale right now http://pjconstable.bigcartel.com/

Jessica Esper, better known as The Graphix Chick, is a passionate creative expert from Washington D.C. working in the fields of graphic design, customization, illustration, painting, and photography. Her original artwork contains bold, bright colors in a style that embodies clean sophistication. A graduate of The Art Institute of Washington, Jessica’s designs have received both national and international recognition, to include awards from Adobe and Kidrobot. As her portfolio demonstrates, Jessica’s preferred canvas is anything but paper! Looking to inspire fans of her work, she created a YouTube channel and posts on Instagram to show her creative process. “I love learning and pushing the limits of my creativity. I’m constantly searching for new materials to paint and exciting projects to tackle.”
-Jessica Esper
Instagram: @thegraphixchick
Twitter: @thegraphixchick Alison Perez, aka Miss Zukie, is a contemporary artist from NYC and the creator and designer of the ZUKIE character.

“Zukies are mysterious creatures that do not talk. They communicate with thought bubbles and facial expressions. Zukies intend to generate emotion through their visual thoughts and that is how they create an emotional bond with us”- Miss Zukie Carlo Cacho and Gabriel Dans, best known as Wetworks, are veterans in making and customizing designer toys, including one-sixth figures. What started as a hobby for Carlo in 2008, is now a full-fledged toy label with clients from all over the world. Carlo conceptualizes and creates the characters for Wetworks and are brought to life with the help of Gabriel, a sculptor by trade. An undeniable powerhouse, these two are set to make a statement in the designer toy arena in the years to come. Charles Rodriguez AKA Gorgocho, is a Venezuelan artist graduated from the School Of Visual Arts Cristóbal Rojas. He has worked over 13 years in advertising as Art Direction and Creative Director. In 2012 he participated for the first time in a competition of art toys directed by Freakstore, after that he participated in the munnyworld contest and received three awards, first place in the Foomi and Kracka and also second place in the Bub category, then participating in several exhibitions and joined the Red Mutuca art collective. Currently spent eight hours to advertising and six to create toys. Saturdays for television series, Sundays sleeping. Salient features of his style: no eyes, carved vinyl and modeling. Big Fan of polar animals. Our very own Adam Lister! the one who created out badass TTC Logo! whoop whoop! Mr-Lister is a graphic designer by day and taking inspiration from tattoo and street art,he works to put a personal twist on things. Adam lives and works in Leicester, UK with his wife and and two children. Currently vinyl and t-shirts, and his children, take up a lot of his thought space but he is always working on something new and exciting. Check Mr Listers work over at http://www.mr-lister.co.uk or Tweet him HERE and spy on him via Instagram HERE be ready to be impressed with his customs and illustrations.

Mike Fudge, born in the summer of 1986 Dallas native Mike Fudge is a modern artist, illustrator, and creative living in Denver Colorado.  Claiming his art is homage to nature, hope, and daily life, Mike says he spends his days and nights honing his craft. A certain mystic element exists in the imagery he creates inspired by ancient cultures and the worlds great wisdom traditions. Personified animals may co-mingle with the normal in a sacred world where anything is free to come to life. We did a The Toy Chronicle artist spotlight —>HERE <— A fellow friend Mike Strick is an insane artist and level of detail in his work is just……. yeah just look at the custom Kidrobot Munny below! don’t really need to say much right? The man behind the crazy monsters and characters is Nerviswr3k taking sculpting to a whole new level. With his vinyl platform coming soon in the next few months 2015 will be another big year for him. Welcome Nerviswr3k who’s work you can never forget.

A Brazilian self-taught illustrator, Sergio has been professionally illustrating since 1987 for advertising campaigns, magazines, newspapers, children’s books and others. He is also a portrait artist, cartoonist, graphic designer, sculptor and air-brusher. He has fallen in love with designer toys since 2007 and has since been collecting, creating, and customizing art toys. In 2011, won the MUNNYWORLD contest with his “Project: MUNNY” custom and gained international recognition. Once his work is not usually related to only one specific subject, his style gives a soul to each of his freak and unique characters, that mix a somewhat dark, but happy past. Are you ready for the months ahead? which artist are you most excited about? Pj’s will be available from 27/02/15 stay tuned for all the updates and details of all the releases. http://www.collectanddisplay.com/