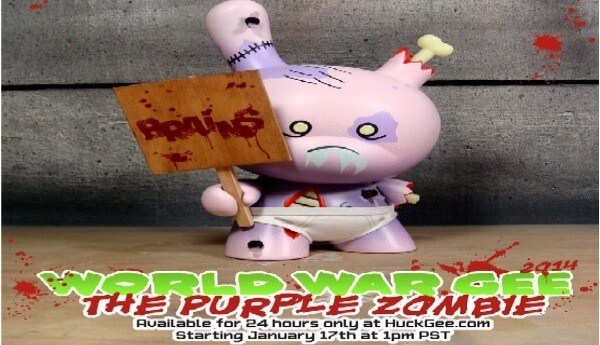 From what I can tell its going to be around 7-8 inches Dunny but with glow in the dark bones!!!!

Should look similar to the original Dunny shown here. “It’s time to get infected with latest series of Huck Gee customs. The World War Gee Series of custom figures will feature classic designs along side Never-Before-Seen characters.

The first outbreak starts on Friday, January 17th and will continue throughout 2014. All releases will be available at www.HuckGee.com for 24-Hours only. It’s every man for themselves because once the sale is over – that design will never be seen again”

We bing you a little update with official photos. The additions of flies are a nice touch plus the glow in dark parts. I hope the underwear will fit me.

The first outbreak begins with The Purple Zombie on Friday, January 17th at 1pm PST. It will be available at www.HuckGee.com for 24 hours only. It’s every man for themselves because once this sale is over – this design will never be seen again.

This figure will be signed and include all shown accessories. Due to the nature of the materials, some differences should be expected in each figure. The turnaround time on delivering this piece will be 6-8 weeks, $450 each.