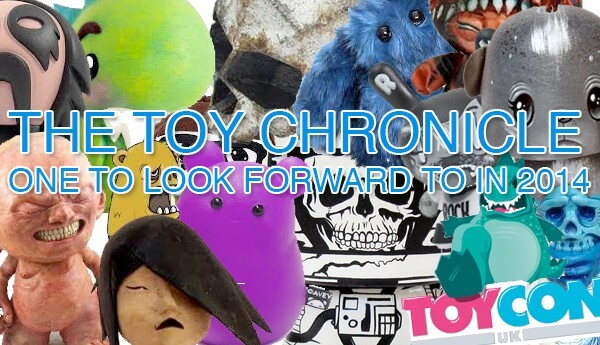 [pullquote]Been following Artmymind and his customs are some next level sculpting and style. cross between Asian/robotic/knight  just hard to describe the work, yeah amazeballs. I don’t think a production vinyl would ever get the amount of detail.[/pullquote] [pullquote]I know, I know, this maybe biased as Rich aka Toy Terror is a member of the TTC but I’ve see him working on stuff and the lad is a beast, he doesn’t stop till it’s right and that line work is top. With his work getting out in the world I believe 2014 will be a big one[/pullquote] [pullquote]No offense meant by this but, the one thing everyone reading this blog is looking forward to in 2014, above anyone else, is TOYCONUK 2014. Yes, ToyConUK 2013 was one of our Breakout of the Year winners – rightly so – it was bloody ace. 2014 will see the attendance increase thrice-fold – which also sold out within a month of tickets going on sale – and everyone knows what they’re doing. 2013 was the test-run, 2014 is legit. Also, The Toy Chronicle will be in attendance. Probably giving out free beard hugs, beer & generally having an awesome time with you guys.[/pullquote] [pullquote]Lisa Ray Hansen is my choice for one to look forward to. I look for not only people that paint well but also artists that sculpt character into their pieces and that is something Lisa is extremely good at. Her latest vintage Adidas custom of the Flawtoys stranger really blew me away.[/pullquote] [pullquote]First seen at ToyConUK 2013 this platform is going to be huge once its released officially. I managed to get my mitts on a large and several mini’s at the con and really cant wait to get more. The 4inch DIY’s have got me really excited as the better the platform the even better the customs!.[/pullquote] [pullquote]Age aside, this young chap is producing really exciting work and has exhibited far and wide this year. Cannot wait to see PJ’s characters developing even further in 2014[/pullquote]

Who do you think will go big in 2014? Let us know in the comment! Look out for our final The Toy Chronicle ‘does 2013’ post tomorrow. It’s a biggy too. You wouldn’t want to miss it!