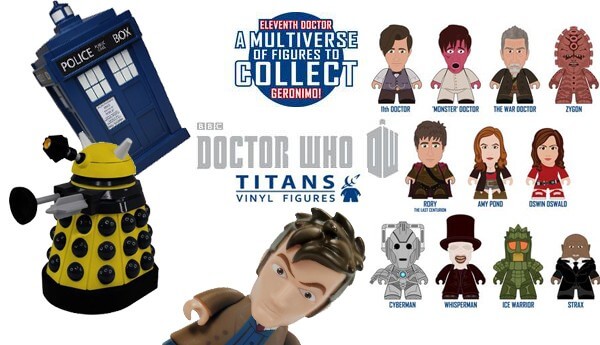 With all the success and fan following, Titan are set to release another series of  Doctor Who vinyl toys.

This series will be the 11th Doctor  “Geronimo!” another 3 inch blind box series  a release date looking like 18th May 2014. Right now its just the illustrations but we will keep you updated on the production photos.

Along with the series their should be a few bigger versions of the vinyl toys. To  Celebrate the 50th anniversary of the world’s favourite space-and-time-traveling adventurer with this new range of 6.5 inch collection. They should be releasing 5 different colours of the Dalek and priced at £16.99 Last but not least the 6.5inch Tardis! You can find more infomation and pre-order over at Forbidden Planet.

The Toy Chronicle would like to congratulate Matt Jones in securing another series of Doctor Who Vinyl Toys.