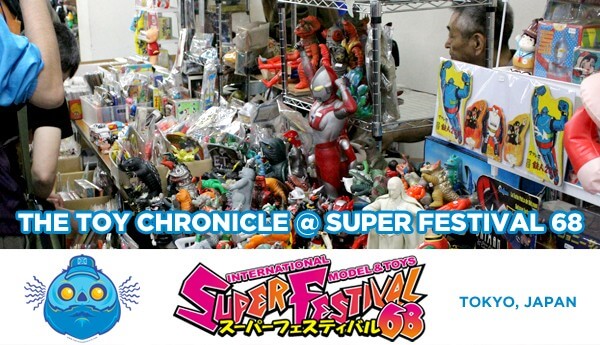 With the toy festivities in full motion back home with another successful ToyCon UK on the same weekend, I realised it was Super Festival 68, the International Model and Toy event here in Tokyo so I was very keen to get down and check it out for my own toy fix. It was a beautiful sunny day with doors opening at 10.30am, so I set out around 9am to catch the subway and walk from Tokyo station around the Imperial Palace grounds to the Science Museum venue at Kitanomarukoen and get in line.
The queue for non-ticket holders was constantly perhaps 150-200 strong but the queue steadily streamed in and the whole experience was well organised and very smooth, even for someone like me with basic/crappy Japanese skills. The entrance fee was 1500JPY which works to be about £8. It turns out many of the exclusives are available on tables set up outside the venue before doors open, with many people lining up from as early as 5-6am to snag the array of exclusives on offer. By the time I was entering many people were already streaming out with bags full of toy goodies. You snooze you lose! The festival is set across several areas within a hexagonal layout, with smaller rooms branching off larger spaces and also a stage area for guest appearances. The first impression is a bit overwhelming, an overload for the senses, there’s SO many toys everywhere. Dotted amongst vendors selling new and old toys there’s also artist booths and independent producers.
I spent a good hour just walking around and drinking in all the toy goodness on offer, finding out what vendors are where. On a second and third pass, more places and toys appear that I’d have missed the first time, with vendors producing new boxes from behind their table which are feverishly pounced on by passing punters. This year there was a Super Art Toy section with the likes of T9G, Konatsu, Shoko Nakazawa Undead Toys, Art Junkie and Devilrobots who are probably more familiar to the readers. In amongst the larger areas there were Galaxy People (a fellow Brit!), Aimodo, Bullmark, Dune, Rampage Toys, Marusan, Iluilu, Sikamaaku, Billiken Shoukai, Restore, Black Book Toys, Astro Zombies, Gigabrain, Jet Some, Kenth Toy Works, Deathcat toys, Siccaluna, Tamotsu Kambe, Moun10, Kento Sato and many, many more. There was a heavy dose of old school vintage kaiju and robots and manga/anime merchandise, as well as classic lines like G.I. Joe, Star Wars and Transformers. The highlights for me today were speaking with Masayuki Yamada at Moun10 about a new Tetsujin 28 figure from Siccaluna (super cool!), Kambe Tamostu giving me some invaluable toy production and painting advice and it was great to meet Nigo (BBT) too. Getting to watch live drawing from the different artists and live customising from T9G was awesome! The video far from covers everything but I hope it gives you a little taste of the day itself. Also check out the highlight gallery below. Hoping to check out WonderFest in the summer and the next Super Festival in September and discover more about the toy events and producers here in Japan. All in all, very inspiring stuff!