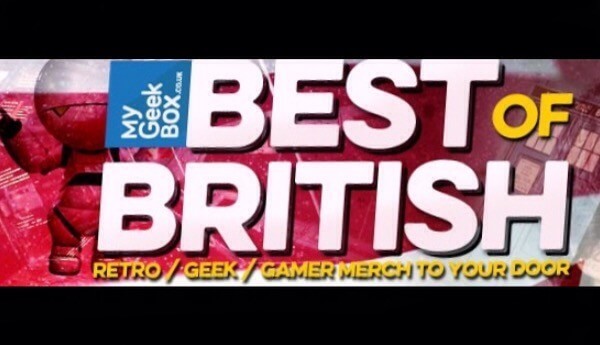 Well we finally managed to get round to opening a My Geek Box to see if it lives up the the hype, this months “theme” was Best of British, so what was expected when ordering, Doctor Who or maybe something from Shaun Pegg’s film catalogue. On first feel the box had some weight to and when opened, you can see that the box is packed to the brim with goodies, so let’s get right to it and find out what’s in the box….. So along side the monthly MGB magazine, we had a talking, plush Dalek key chain from Doctor Who, a metal Baker Street sign from Sherlock Holmes, a pack of Dennis The Menace sweets (candy) and one of my favourite bits, a copy of 2000 AD.
Now every month there is a t-shirt and this month the tee was epic, it’s a Red Dwarf “StarBug” top that it’s right down my ally, if only this box was mine and not someone else’s (although it was a girls tee, and was described at fitted but was a bit on the baggy side)
And now onto the item giving the weight to the box, oh yes it’s a set of Thunderbirds shot glasses….. Yeah I know awesome right. So all in all not a bad little box, although I would have liked to have seen a vinyl toy in there, but the guys do put Funko Pop figures in, some months so let’s wait and see.
We worked out that there is around £30 worth of stuff in a box that costs, either £15.99 a month (3 month rolling subscription) or £16.99 (1 month rolling subscription).
Now the guys also do a Tjunkie box, that is just the T-shirt for £7.99 a month and come in a wide range of sizes for men or women (S-XXXL) as well as the women’s fitted tee (8-18).

The December theme is Geekmass, and we should be able to do an un boxing or that and my even add a little video,
So get over to https://www.mygeekbox.co.uk and get your order in by the 31st of November so you can join the fun.
Also we are in talks with the guys to bring you a chance to win a nice little prize….. Keep your eyes peeled.