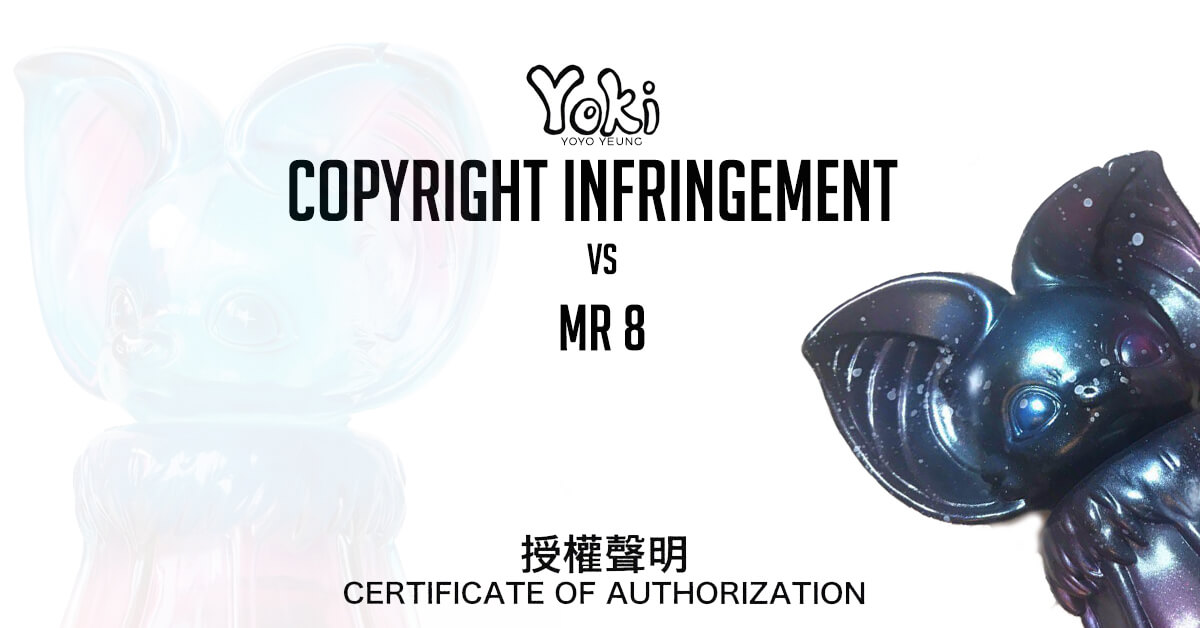 Sometimes bad eggs ruin the designer toy scene and artists get ripped off with deals. Not only within our scene various industries also have the same problem. In this case, we don’t like to see artists like Yoyo Yeung (Guk Ling Yeung) who gave you all her adorable “Yoki” bat. Behind the scenes, a legal case has been put forward where the artist has been ripped off via a China producer. Unauthorised to produce and intentions to sell Yoyo’s YOKI, let alone credited in the way she should be credited. Let this case be a learning curve for other artists and letting collectors know not to back releases until the case has been solved.

In July 2017, I graduated from University. Before my graduation I created Yoki. Yoki means Yoyo’s kid, which is my Kid. Here I want to say I am really grateful for the people who are supporting me and loving Yoki.

The inspiration of Yoki is the animal Bat. I have been in love with bats since I was a kid. For the last three years I have been drawing a purple bat with red ribbon which is representing me (posted publicly) . And Yoki was developed from this purple bat. I by myself designed and made Yoki into sculpture. I tell Yoki’s story through illustrations. Within his story I keep using elements of universe and crystal, which I have been using for the last few years especially during my High School period.

A few years ago I registered an online Taobao shop named UNICORNART. I love unicorn because it shows the feeling of unknown dream. Later I simplified the horn of unicorn into a triangle, and made a series of collage art for cats. I called them Unicorn-cat (Instagram: universecatyoyo). Last year when I was designing the package of Yoki product, I named my future studio name – UNICORNTOY. I hope one day I will make this studio a real one. But then later I feel like the name using UNICORN is a bit too concrete, maybe UNI-TOY is better. UNI- means unique, UNI-TOY means unique toy. Hereby the name of my future studio is born.

Recently I heard rumours that I am not the designer of YOKI and I did not do anything at all. I was heart broken and here I need to respond. I graduated last year in July. Before I graduated someone recommended me to MR. 8, after a few communication with MR.8 I knew about designer toy (sofubi , vinyl toy). I love playing toys myself and I think making toys would be interesting too. In June 2017, I finished designing YOKI and I made a clay sculpture of YOKI to show MR.8 hoping to have a chance to make YOKI Into Vinyl toy. He was satisfied at my work and helped me improve just the details of the prototype. He agreed to be in charge of producing and selling. In October 2017, MR.8 mentioned that he would provide a formal contract for a better cooperation.

Until December 2017, there was still no contract. MR.8 said he would fly to my city and have a meeting about cooperation, but he kept stalling until April 2018 when I flew to Shanghai for Shanghai Toyshow and met him. Then After May 2018 Thailand Toy Expo, there was still nothing. I couldn’t wait for him any more, I made one contract myself and hoping we can start talking about it and working together formally. Surprisingly, MR.8 suddenly said that the copyright of YOKI belongs to his studio.

Then I realised, MR.8 and his partners had secretly registered the copyright of YOKI in China mainland, 2017. I couldn’t believe he had been lying to me for so long while I treated him as my friend. They had been planning for so long. They didn’t tell me about registering, and even told me at the beginning that registering has no use.

I NEVER had any communication about Studio Cooperation with MR.8, NEVER sign anything with him. He only needed to help advertising my UNI-TOY studio brand, produce and selling my YOKI. He said that he would like to help more new artists, so I advised him to build up his company or studio, be better to work with other artists (studio), formally.

I really appreciated his guide to designer toy area. I have been regarding him as my teacher, and I am grateful for his help and guiding all the time. Our Profit sharing was supposed to be based on what we pay, but I haven’t really been creating new design or doing any new illustrations. I have been doing things that was not what my time should be spending on. For the last few months I need to do a big amount of design , colour design, quality check on my products, packaging, selling, shipping, contacting and so on. For Thailand Toy Expo I nearly had to do everything except for paying for the factory to produce. Meanwhile MR.8 didn’t ask and didn’t care about anything. When I got back home MR.8 and his team were even threatening my reputation and safety for getting the money ASAP.

After their threatening I couldn’t concentrate on creating or designing at all. Even my family and friends beg me for changing my job, and give up YOKI.

I don’t say much about my feeling normally, but during the last few months it was the most exhausting and heartbreaking period. I couldn’t explain to my fans and friends about what was happening when they are confused. I had great pressure that I couldn’t help crying almost everyday. But I still have to face my setbacks and be positive. I will keep on making my new works because there are people still supporting me. As the designer of YOKI, I declare I am fighting to get back my copyright of YOKI by Law.

I declare that everyone please do not buy any product related to YOKI that I didn’t announce or post.

Hope everyone respect Artists’ copyright. This is the motive for us to create better work.

I am really grateful for the people who has been supporting.

Here at The Toy Chronicle, we hope fans of new and old not to support the releases of YOKI until further notice or the words authorised sale.

Designs from now on will have a certificate of authorisation like Lumicar as seen below. 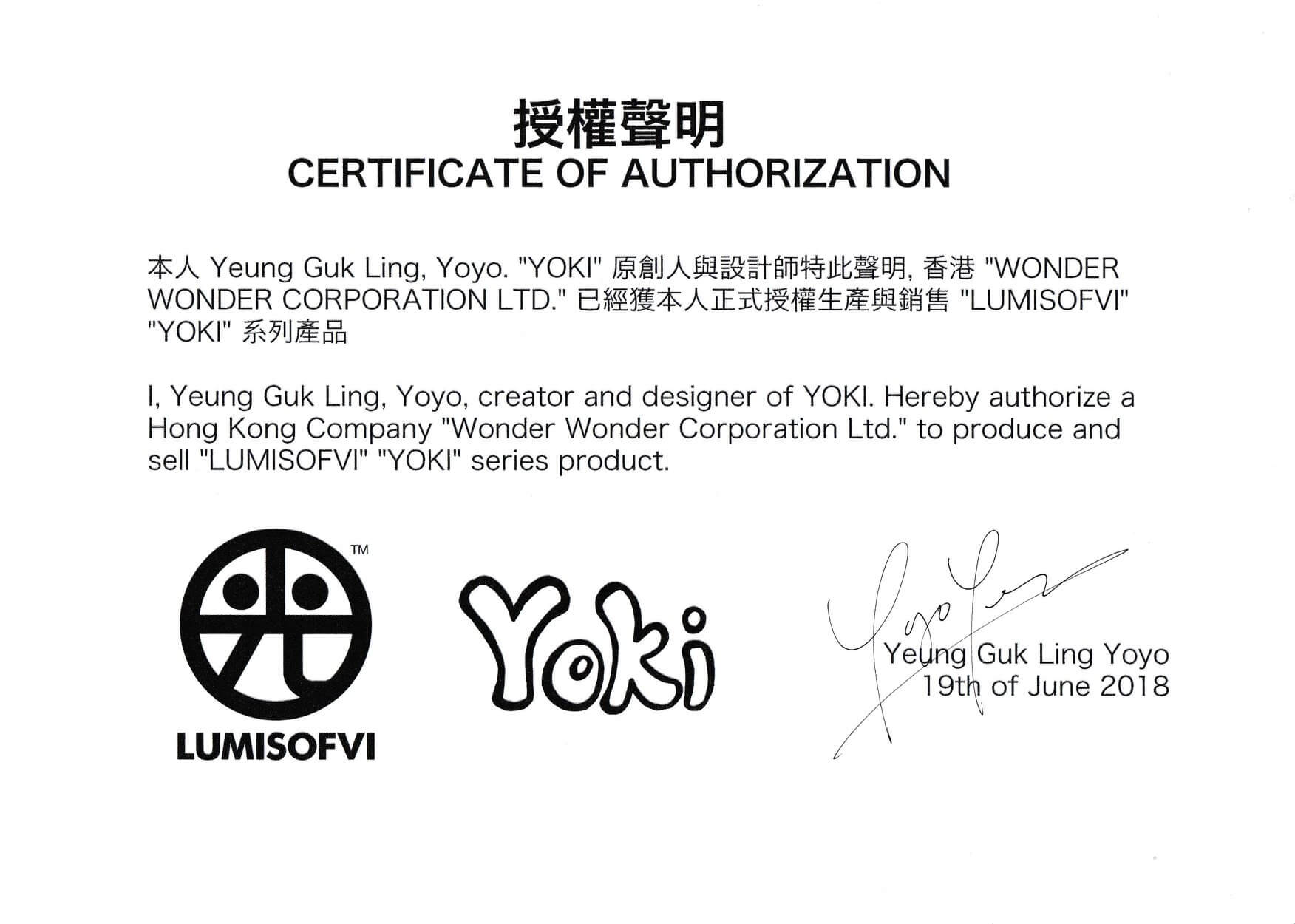 We understand there’s always two sides to the story but speaking to Yoyo the evidence is stacked against Mr 8. We do not tolerate this kind of behaviour so we hope fans of new and old can unfollow and not support this bad practice.

Speaking to Yoyo, a number of unauthorised releases will be set to be released as well as micro version and we hope you do not support in any way possible as we fight for her rights. Let this case be a learning curve if you are thinking of producing to get contracts signed even at an early stage. Supporting unauthorised releases will just fuel the black market and give these producers to do this type of things again.  We wish Yoyo good luck and we will keep you all informed of how the case is going and when the new authorised versions are ready to be released.

Remember,  true collectors will never endorse such a company.

A legal letter and statement from Mr 8 have been made about this case and we will update with Mr 8 side of the case. In our opinion, so many companies to choose from please look into which one suits your own project and brand. Stay tuned for Mr 8’s statement from Shanghai newspaper.