Looking for something crazy and outstanding at ToyCon UK 2016? look no further as Mike Strick does it again. Blowing us away every time he creates something. Not familiar with Mikes work? click HERE….. Don’t forget to pick your jaw off the floor. ToyCon goers this will be your chance be one of the first collectors to own Victor Blattodea’s Manual Over-ride. Enjoy the story that goes with Victor Blattodea’s Manual Over-ride, which will help explain where this slightly strange concept came from. “Victor Blattodea” was born behind a basement wall of Castle Frankenstein. It is impossible to know whether he gained his remarkable intelligence and opposable thumbs thanks to exposure to the many strange chemicals in the castle’s laboratory or by a simple twist of nature. Either way, none of his forty-three siblings shared his gifts. Growing up so different from his brothers and sisters, Victor was lonely and spent much of his time secretly watching the Doctor at work. He found that he could easily understand the experiments and it wasn’t long before he spotted the flaw that was making them fail and causing Frankenstein so much frustration. Stepping out of the shadows he took a deep breath, introduced himself and began to explain what he had worked out. He was surprised to be greeted only by shouts and a flying wrench. It seemed that the Doctor was well aware of his fragile sanity and was not ready to accept advice from a talking cockroach. Running back to safety, Victor decided that he would continue the research on his own. There were plenty of spare parts and materials in the laboratory left over from the Doctor’s failed experiments. Collecting them on foot under a barrage of thrown hand tools would be dangerous, so first of all he needed transport…” “Victor Blattodea’s Manual Over-ride”. It’s a fully assembled, hand-painted and weathered display piece. Hand-cast in thirteen individual resin parts. 24cm long from tip of finger to rear edge of wheel 12cm wide 17cm tall at the tip of his scarf It will be available for pre-order at ToyCon 2016 from the SUVB table at the Toy Chronicle stand (1-3) where a £20 deposit will secure you one at the special ToyCon price of £180 + p&p (balance payable before shipping). “These will be made to order on a first come, first served basis. I will get each one out to its new owner as fast as possible but they are time-consuming to produce and can’t be rushed!”

You can catch Mike over at his blog, it is a great insight to his work. http://sculpt.strick.co.uk/

“It’s a group, it’s a platform and its a means for people to distribute creative projects.

Right now it’s just going to be a big cartel page with a few exclusive and limited edition toys and figures. Over the next year it will evolve in to its own website, with timed releases, its own IPs, exclusives and specials editions.

We have the UK exclusive licence for Devil Toys and a distribution agreement with Acid Rain, these arrangements will grow with the community, as more people take interest in more lines SUVB will use its connection and buying power to get exclusives and distribution rights for other lines and company’s.” 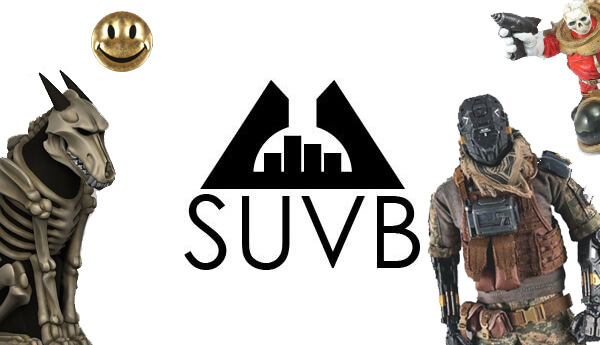 SUVB is now an open group and you can find the PAGE HERE. The SUVB store at http://suvb.bigcartel.com/