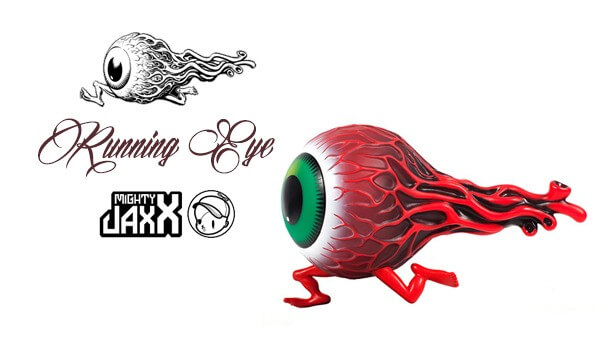 Might Jaxx have released the date when we can get our filthy hands on the Running Eye which was previously teased HERE. With the show in a few days time the wait is nearly over so we all can have this on display. You can also check out some of the other artist customs of the Running Eye in a previous post HERE. Mighty Jaxx x MPH have invited art and skate personalities who share the same respect towards Jim and his works, to contribute a unique custom Running Eye just for this event. Also available are some lifestyle items based on the Running Eye design, produced by SUBCREW, to commemorate the event.

“Running Eye is one of my most favorite characters that I’ve created. I like displaying it in my studio, I think it represents art and belongs in every art studio. When I first became obsessed by the symbolism of the human eye, it was after the shock I experienced while seeing An Andalusian Dog, a 1929 surrealist silent movie by director Luis Bunuel and Salvador Dali. The opening scene begins with a close-up of the apparent slitting of a woman’s eye by a man with a straight razor as the full moon is slit by a narrow passing cloud. It was not so much the horror of the deft incision but the overriding violence of symbolism and the relative connection to art, artists and the viewing public, and how all who were in attendance in the tiny art films theatre channeling those images through their corneas, retinas and optic nerves wired directly to their brains vicariously experienced the razor’s slash in the most personal way.

The nearest analogy is looking into the barber’s mirrors mounted in front and back repeating your reflection into infinity just as the aftershock memory of slitting flashes back to continually repeat the vicious assault. The eye is not only the window of your soul, but it is the window of your world and especially the window of perception for artists of visual expression. For them, like the eagle, the eye is everything, seeing, observing, looking, scanning, surveying, glancing, gazing, peeking, staring, and knowing.

The subsequent artistic application of mentally processed images are systematic but they are bound for other eyes to view as if to complete some vicious circle. But now with Running Eye, when the eye itself is the subject, and the object of such seeing and being seen, the eye IS the art and the art IS the eye, made by the eye for the eye, well, that’s where Runny comes in. And that’s why he is running, to keep up with it all.”  – Jim Phillips

(all images and details lifted from Mighty Jaxx)