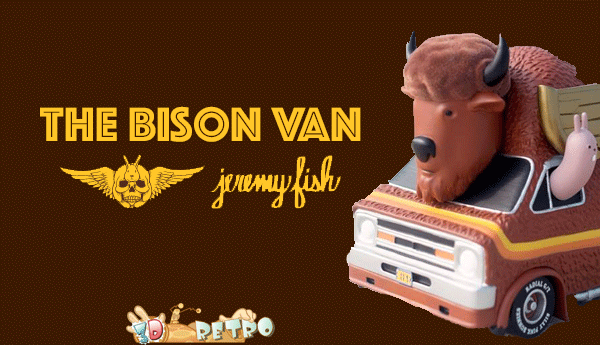 Ever since I saw Jeremy Fish’s Bunny Skull it was an instant love for Jeremy’s work for me. When I think of classic designer vinyl Jeremy’s , TurtleCamper, Bunny Van and the hilarious Barry the Beaver they are the ones what always springs to mind. It’s been hell of a long time since Jeremy released an vinyl toy and the wait is coming to an end, the wait is nearly over thanks to the guys over a 3DRetro! I LOVE YOU GUYS for making this happen.

2 weeks ago Jeremy uploaded this fantastic illustration of “The Bison Van” with the comments, Of course I was ultra excited that the design was going into production but no way did I expect it to be finished, then today Jeremy uploaded what looks like to me the finished Bison Van! Give some love to https://www.3dretro.com/ for making this happen.

(all info and photos lifted from  Jeremy Fish Instagram)