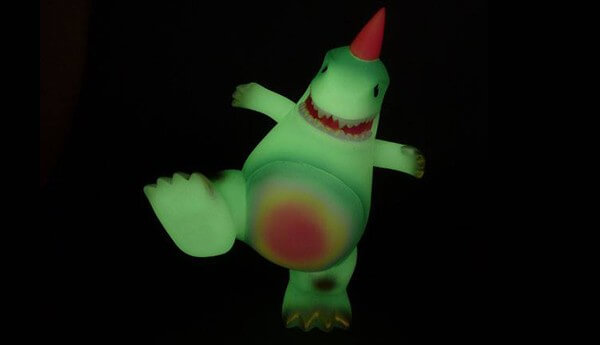 We’ve just received word that at the forth coming T-Con Custom show, the ToyCon UK team will be releasing a new colorway of the ToyCon UK mascot: T-Con! As you can see from the image above, T-Con is going to light up your life with his GID abilities!

Below is the press release from the ToyCon UK team:

“The ToyCon UK team are thrilled to announce the latest colourway of their stomping Mascot, T-Con the Toyconosaurus. Made from intense glow in the dark vinyl and finished with pink, green and gold sprays he stands out whether the lights are on or off.

A very limited number of these will be available first at the T-Con Custom toy show at Fleet River Bakery in London on Friday the 1st November priced at £35.00. If there are any remaining they will be on sale at the ToyCon UK Store on Saturday the 2nd November at Midday.

T-Con is designed by The Hang Gang, sculpted by A Little Stranger and produced by ToyCon UK and Unbox Industries.

We have also restocked our DIY colourway especially for the show, so come along and be inspired to make your own custom T-Con”

Are you going to grab one?