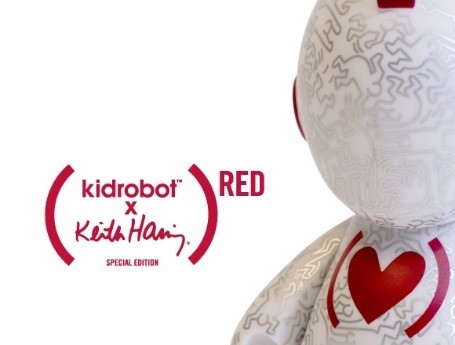 We didn’t have the information on the 3″ version of the Mascot Bot so here we go. Here are some fashion items too But the most important thing it will help the charity too.

Kidrobot has joined forces with Keith Haring Studio and (RED) in a formidable collaboration to combat Aids in Africa with the release of this capsule collection. Launching on November 1

For those not familiar with Keith Allen Haring

Keith Allen Haring
(May 4, 1958 – February 16, 1990) was an artist and social activist whose work responded to the New York City street culture of the 1980s by expressing concepts of birth, death and war. Haring’s imagery has become a widely recognized visual language of the 20th century.