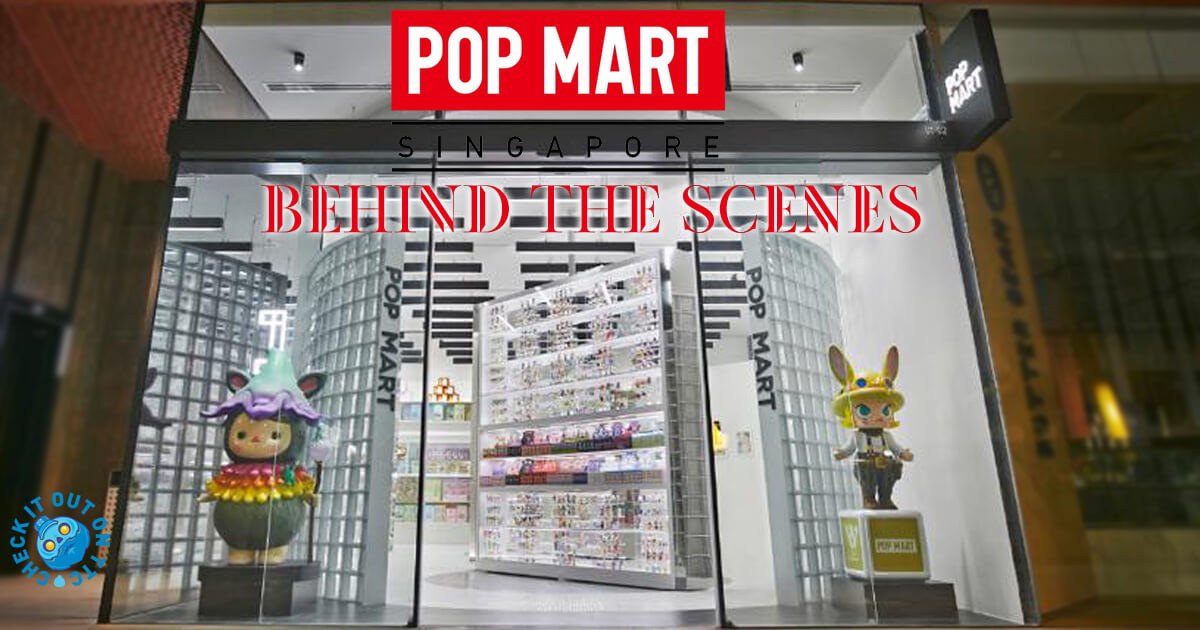 South Asia’s first POP MART official flagship store officially opened today in Singapore at Funan! Yesterday we were lucky to be invited to the media preview to the brand spanking new POP MART store. Walls and space filled with POP MART goodness ranging from the new line of plush all the way to POP MART’s signature blind boxes. Strikingly clean and modern look to the retail space. With the Grand opening EXCLUSIVE was made available to lucky collectors who got to visit POP MART Singapore too as well as plenty of merchandise. Below is a LIVE video stream walkthrough from our dear Lai Yui Wai. WARNING CUTNESS INCLUDED! What made POP MART Singapore that extra special was to see local artists having their art displayed at POP MART even if the art wasn’t for sale. Giving collectors of new and old a taste of what POP MART and the local art scene has to offer.

Check out below is the behind the scenes of POP MART South Asia’s first Official Store Singapore at Funan SG and a walkthrough.

Founded in 2010, POP MART is the largest and fastest-growing pop-toy maker in China. Shoppers will be treated to an exciting selection of licensed pop-toys with fresh new designs to be released every week. Popular brands include Disney Princess, Frozen, Mickey Mouse, Warner Bros. Harry Potter and Universal Studios Minions. POP MART is renowned for its extensive line of high-quality pop-toy figures in blind boxes.

The publicly listed company has teamed up with famous designers like Kenny, Pucky and Kasing Lung, to launch many fan-favourites such as Molly, Pucky, Dimoo, Labubu, Bobo & Coco and more. Every box is a surprise, including extremely rare mystery figures which are highly sought-after by devoted fans who enjoy the thrill of collecting the whole series.

The 1,122 sq ft flagship store situated in the city centre of Singapore is POP MART’s first store in Southeast Asia.

This new store adds to the brand’s presence in Asia and will support the company’s growth plans outside of China, where POP MART operates more than 136 retail stores and over 1,001 Roboshop vending machines in 33 cities.

Located at the main level of Funan, this inaugural POP MART store features a futuristic concept with the sleek and easy-to-shop interior with wide aisles and eye-popping visual and merchandising concepts to provide shoppers with a delightful shopping experience. POP MART official store in Singapore is wholly owned and managed by POP MART South Asia Pte. Ltd., a joint venture between POP MART GLOBAL and ACTION CITY, a homegrown retail chain with 20 years of expertise in the business of collectable pop-culture art toys and strong community presence in Asia.

A platform for local and regional artists to grow beyond their existing profile Being a part of the exciting store opening are Singaporean sculptor Daniel Yu’s The Lunar Creep, all 3 versions of the AP-2K by Singapore-based artist, Wetworks, and Singapore-based illustrator and toy designer Jessica Emmett’s resin toys from the Draffi Pup series and Unicorn series, along with the product features by local and regional artists, Kong Andri, GAGATREE and Sean Studio, who have created quirky Looney Tunes merchandise such as Sylvester & Tweety, Sylvester OBOT and Bugs Bunny.

A deliberate focus on the products created by these local and regional artists on the opening day of the Singapore store perfectly aligns with POP MART’s direction of grooming budding artists by providing opportunities for them to showcase their creations and assisting them in areas that they might not have had the capacity to take on alone.

POP MART exclusives available only at Funan To celebrate the opening of POP MART’s first official Southeast Asia flagship store, exclusives and gifts that are only available at the Funan store will be released.

Pucky Rose Knight Baby Figure Introducing the star of the show, the Pucky Rose Knight Baby is a Singapore-exclusive collectible figure, specially designed to celebrate this exciting occasion. Her candy-like colours are inspired by the soft colour of her hand-held rose and her heart-shaped shield and pastel helmet plume certainly perfects the look of a baby knight.

This exclusive figure can be purchased at $39.90, with a minimum purchase of any 2 blind boxes!

Love you and leave you with some photos of public opening from today courtesy of POP MART SG. Stay safe and keep collecting. To ensure everyone’s safety during this trying time, there is a capacity limit that POP MART SG will adhere to. *Entry Slots are LIMITED and running out FAST!  Kindly book your entry slots with POP MART at: www.popmart.sg