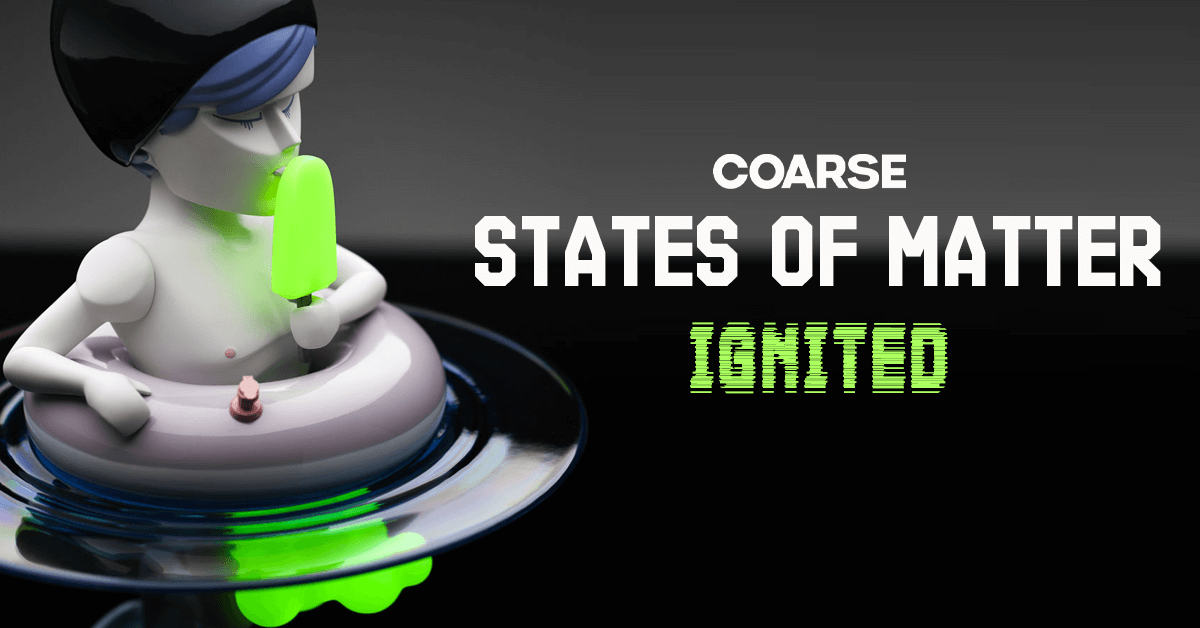 Originally released at BTS 2019 earlier this year, and with a release via Popmart last month, States of Matter – Ignited will now see a release through producers – coarse! Check out the release details below!

For those that missed this release the first two times (although to be fair the first was in Beijing, so we’ll give you some slack), coarse will be dropping the remaining States of Matter – Ignited stock on Tuesday 24th September. This will likely mean that any coarse F&F (or F&F+) members will have access tomorrow (Fri 20th Sept) would be our guess. Standing at 15inches tall, States of Matter – Ignited is priced at $278. You’ll be able to purchase HERE on the coarse store!

Take a dip in the water
Just for a moment
And let your soul transform.

States of Matter – Ignited finds noop floating blissfully into a smoldering summer night. He licks an ignited popsicle, the resulting bubbles light up the water below, and he keeps floating onward. As the current picks up and he floats farther from his home, noop no longer worries about the mistakes he has made or the sorrows he will face when the sun rises. He isn’t even bothered by the clam lurking just beneath his feet. For a brief moment he finds the joy within his solitude, and the resulting energy is a force so palpable it becomes something entirely unrecognizable: a new state of matter, untamable and wild, bursting out of noop’s soul and pushing him further into the unknown.

This ethereal sculpture seems to balance impossibly, as if noop is actually floating in his swim ring. A translucent midnight-blue water line with smooth ripples separates the world of solids from the world of liquids so that we can witness the same glow-in-the-dark matter enter and depart his body in different states. noop’s effortless sense of grace has a soothing effect even as the clam’s menacing tongue tastes his foot.

Each order comes with a swim-capped noop, his inner tube, one glow-in-the-dark popsicle and matching bubbles, the translucent blue water disc casting a magic shadow, and a carnivorous clam lurking beneath. The sculpture is securely packed inside a color-printed gift box and embedded in black sponge.

They said bad things would come your way, but that was a lifetime ago.