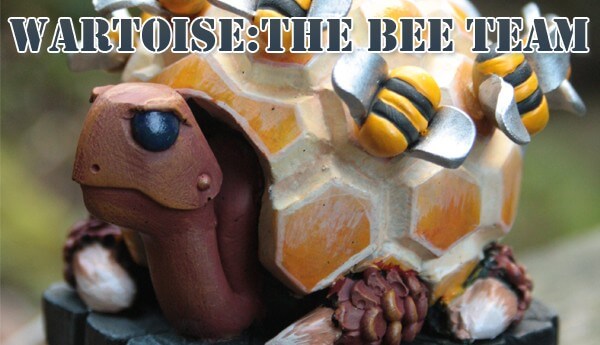 Earlier this week, we featured UK artist – Andrew Byham – he was beginning to assemble his ‘Dirty Dozen’ team of resin Wartoise’s. The latest of which has just been released.

[quote]In 1972 a crack commando team of soldier Bees broke free from a high security stockade to become soldiers of fortune in the Los Angeles underground. Wartoise thought he’d found and recruited them, unfortunately they were just ordinary honey bees, who took quite a shine to his hive like carapace. Now he has a problem, he can’t seem to shake off ……. The Bee Team.[/quote]

This Bee Team resin art figure, customised with polymer clay, hand painted in acrylic. Limited to a run of 10, each piece made to order. They stand 4 inches tall on a black felt base.

You can pick one up here: http://andrewbyham.bigcartel.com/product/the-bee-team If you want to follow other work by Andrew, you can do so on the below links: