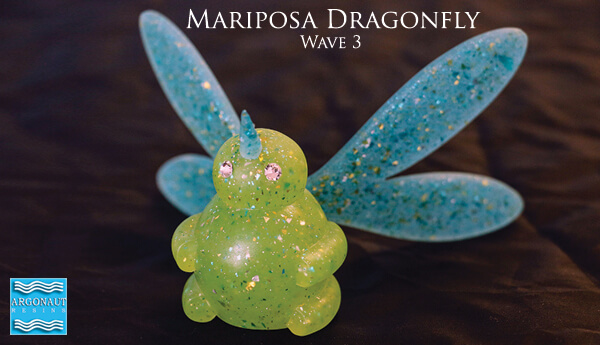 Wave one and two of resin veteran Argonaut Resins Mariposa sold out in minutes and now it’s time for wave 3 to spread its wings and take over the world. This wave will be 24 pieces released in batches starting today all through next week so keep an eye on the online store for more updates.

There will also be a blind box or two included with this run of 12 butterflies, 4 horned variant butterflies and 8 DragonFlypieces. Most will be glow in the dark figures infused with metallic glitter and confetti along with a few new styles to round out the bunch.

The all new Mariposa Butterfly (and DragonFly Chase) figurine from will come in many different colors and styles featuring solid colors to cleartint glittery glow in the dark pieces. It will be resin cast in two parts (body with removable plug in wings) that can be swapped out for a another style or colorway to go with the bodies.

Priced at $45  around £29 each at http://argonautresins.bigcartel.com/

The Mariposa figurine will be signed and numbered on it’s bottom by artist/creator/sculptor Eric Nocella Diaz and will with come with a die-cut vinyl sticker, signed Certificate Of Authenticity and custom instructions on how to put the figurine together (it ships in separate parts)