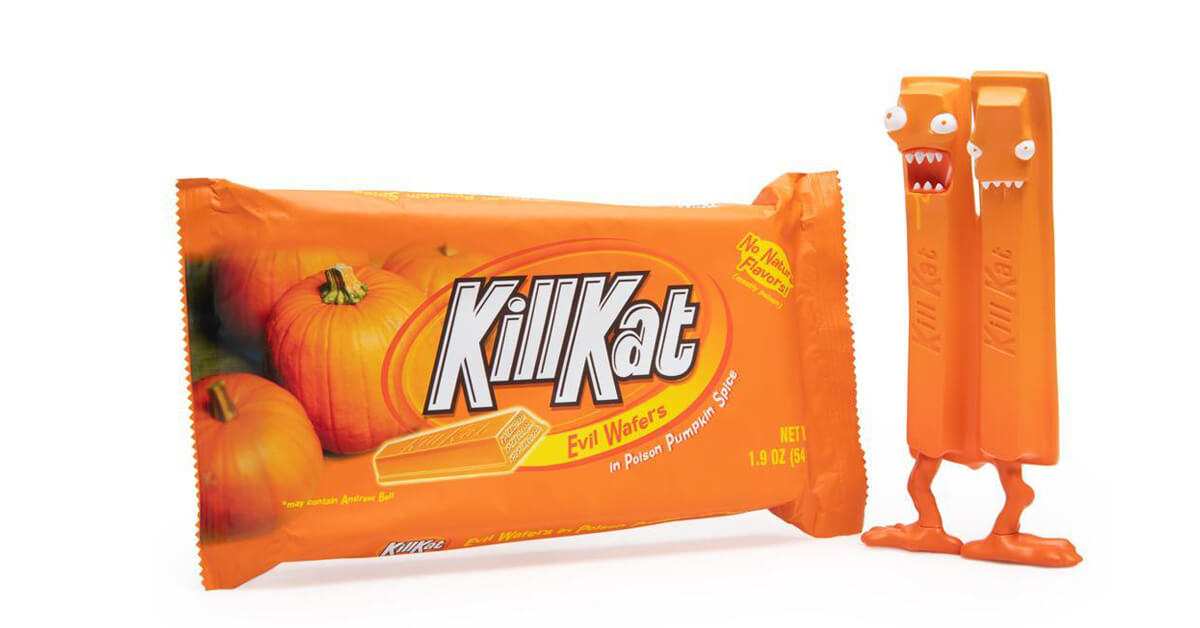 Dead Meat newsletter came into the office yesterday and guess what! No tricks here just treats if you are after Andrew Bell’s Killkat! Linking up with the folks at Kidrobot to present you Poison Pumpkin Spice” edition Killkat!

Summer is coming to an end and your local shops are putting up their Halloween decorations almost 2 months early to make room for the Christmas stuff that they’ll put out next week.. it must be Pumpkin Spice season!

The new terror treat “Poison Pumpkin Spice” edition Killkat is now available via Kidrobot! Orange with a subtle fade, this edition will leave you foaming at the mouth for more! Warning: May cause basic tendencies.

Andrew Bell has been making his food and candy illustrations and sculptures for many years now, and not even the most murderous of killer candies could stop him. And actually, his “killer candy” figures are fan favorites that are more infused with dark humor than sugar – which is exactly why we love them! Bell enjoys seeing people’s reactions at Comic Cons when people see his art and their faces light up, then drop, then light up again before saying “that’s terrible – I love it!”

One scroll through the various “Kill Kat” editions on his website, and you’ll quickly understand why we’re craving more. “Now with 5% More Bones in Every Bite!,” “New! Paralyzing Flavor!,” and “a fruity flavor that is more horrifying than it is healthy,” are just a few of the descriptive gems you’ll find.

And now, new and exclusive to Kidrobot.com, is the seasonal flavor that everyone loves to hate on – Pumpkin Spice! As the fall season creeps upon us and we can already smell the cheap plastic costumes and rotting leaves of Halloween, it only makes sense that a Pumpkin Spice-flavored Kill Kat would rise up and terrorize the inhabitants of its sprawling suburban landscape! Soccer moms beware! It’s all in good fun though, Bell insists, adding that even he likes to enjoy a pumpkin beer or two when the season rolls around. At the end of it all, the good-humored Bell adds a serious note, saying that he also hopes his art pieces will cause people to pause and think about what food they consume, what it’s made of, and what effect it has on their body and the environment.