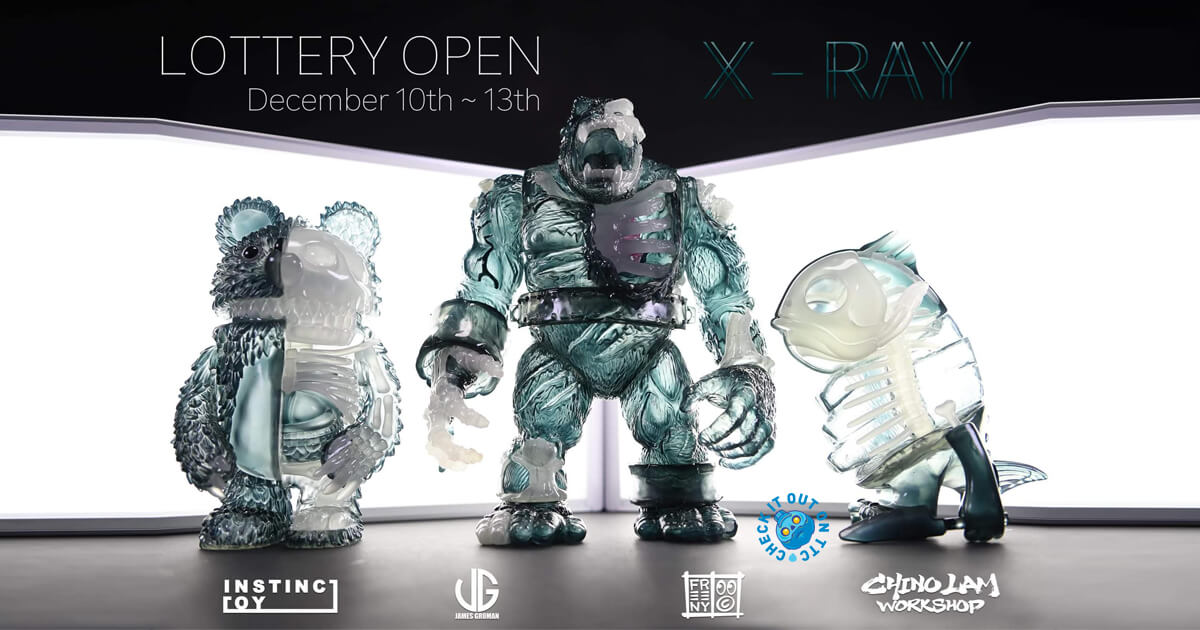 Ending the year with a bang is INSTINCTOY! what collectors have been waiting for, Triple heat! hows about JAMES GROMAN x Jason Freeny x Chino Lam of Mame Moyashi x Instinctoy for one hell of a release day? Like we said last year, Jason Freeny signature dissected/anatomy and Chino’s Sashimi style Senpai mixed with the craftsmanship of Instictoy rolled into one. That’s what we can expect with ANATOMY MAGURO SENPAI. Featuring two Designer Toy Awards winners we get to see Freeny dissected the anatomy of Chino’s SENPAI, no need to call the fishmonger as Instinctoys has it on lockdown. Last year, Instinctoy showed the world the prototype of ANATOMY MAGURO SENPAI which you can check below and the rainbow release was set free a few months back and TODAY the launch of JAMES GROMANx Jason Freeny x Chino Lam of Mame Moyashi x Instinctoy December launch. Regarded as one of the best editions to date, James Groman’s KING KORPSE  (X-RAY) GLOW IN THE DARK edition will follow suit in INSTINCTOY’s own IP the classic Mucky will follow suit. KING KORPSE, ANATOMICAL MUCKEY and ANATOMICAL MAGURO SENPAI will be sold in the last lottery which concludes the year 2020.

The X-RAY series was debuted on October 23 this year and sold via < pre-order sale> in mainland China in line with the opening of the POP MART Beijing Qiaofu Parkview store’s “INSTINCTOY CONCEPT SHOP”, in collaboration with POP MART now its our chance to own all 3!

Jason Freeny redesigned and customized the Maguro Senpai, which is an original work by Mamemoyashi, designed by Chino Lam. The redesigned version will be produced by INSTINCTOY.
It is a triple collaboration project. – 大久保博人

※ Only winners will receive a prize announcement mail. After getting the mail, if you have any questions regarding the lottery results, please contact instinctoy.

Please understand the【Terms & Conditions】before you enter the lottery. The sales page is linked below.

For English language support, please use a PC or laptop to make your applications. (It only shows up in Japanese on the cellphone.)

For further info hit up Instinctoy.blog/posts/