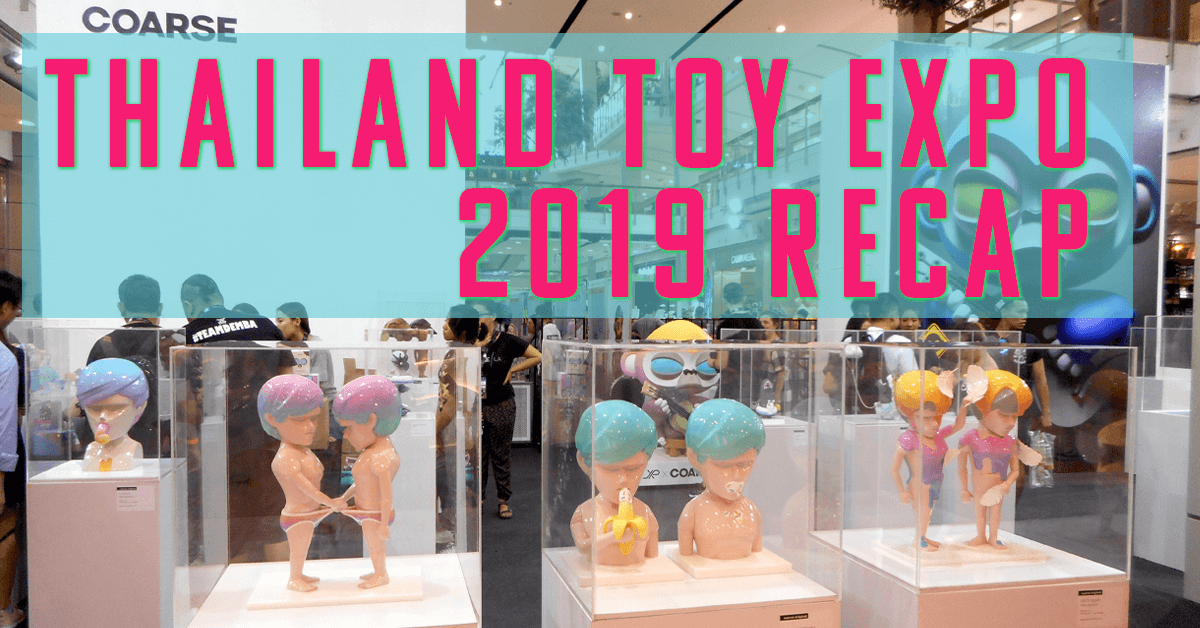 We are a lucky bunch of Designer Toy collectors in many ways, we have a great community around the globe along with an awesome array of Designer Toy conventions to attend. Whilst we may not be able to attend them all, we have those around us that will travel for us and share their experiences. We are lucky that one such traveller to Thailand Toy Expo, Barbara Pavone, was kind enough to write some great words on her trip to TTE last month. Check it out below and remember if you would like to right your review on events that you attend, hit us up via email or on our social media channels! We’d love to hear from you!

The first time I traveled to Bangkok was back in 2017 and my entire trip was planned around the opportunity to attend that year’s Thailand Toy Expo (TTE). As I fell in love with the city, and the expo, it quickly became clear that the 8,000-mile journey from Canada had been more than worth it.

But was it just a case of infatuation? Or would I be equally enamored with the event a second time around? I decided to find out sooner rather than later, so I booked another trip to Thailand to attend TTE’s seventh edition, which ran from May 2 to May 5, 2019. Spoiler alert: It was just as badass as I remembered it.

Now that you’re thoroughly impressed, let’s dive into some of THE BEST toys featured at TTE 2019. No matter what style and aesthetic you’re into, you’re guaranteed to find numerous pieces to fall in love with and these were my personal favorites.

First up, keeping things local, Thai artist Alex Face (whose colourful murals adorn the city and are totally worth hunting down) teamed up with Mighty Jaxx for a 10.5″ Baby Beyond resin figure, which was limited to 150 pieces and easily one of the highlights of the entire show. Meanwhile, Nong Toy, the expo’s official mascot, got an epic wizard makeover in keeping with the year’s theme, Fantasy World. Too cute.

As has become tradition, COARSE was back and took over a large chunk of the main floor with a slew of attention-grabbing pieces, including the debut of Monkey Mambo from JPX x COARSE and If You Show Me Yours – False Paradise II, which is pretty much a masterpiece.

Then there were some super limited releases that were frustratingly difficult to get a hold of, but that just adds to the fun and ups the satisfaction when you do score one. The standout, in my books at least, was the 10-piece drop of MiBo the Otter who had obviously just finished watching ITbecause he was dressed up in his best Pennywise cosplay.

I also still haven’t stopped raving about Refreshment Toy’s feline family, which stopped me in my tracks. This included a surprise release GIANT exotic cat bank and a glittery blue exotic cat ice cream cone that could only be snagged by lottery. I really, really wish I had better luck.

That being said, if I can share one recommendation for tackling TTE, it’s to check the floor plan in advance, make a shortlist of top priorities and try not to stress out. You can’t be everywhere at once and you won’t be able to get your hands on everything you want (that’s just the reality of such a big show), but you can go home happy if you zone in on your Top 3 and build from there.

This time around, my focus was on Chino Lam who was signing and releasing rad pieces all weekend long at the gachabox booth. (Side note: The gachabox shop has some great stuff and is totally worth a separate visit while you’re in Bangkok.) Not only was there an exclusive new Rainbow Lobster, but fans were treated to a limited 50-piece lottery release of the Giant Size Salmon and The King, the latest member of the Mame Moyashi Zoo, made his official debut too.

Meanwhile, the INSTINCTOY booth was serving up not one but two different Mini Maguro Senpai, as well as a bunch of other incredible pieces that could turn any great collection into an outstanding one. Case in point: the epic Anatomy Muckey from Jason Freeny.

Just in case you’re not completely blown away yet, a few more highlights included Mighty Jaxx’s Hell Yeah Sailor Rabbit Plush (Rabby), Chokocider’s Duckoo (who made his TTE debut all the way from Korea and looked adorable as Duckoo Libre), Karen Kei’s mix of old and new Yoyi & Jr.W figures (the Mc.Pig version was a slam dunk), Nakao Teppei’s various Sushi L.A. colorways, plus goodies from Kennyswork, Kurobokan, Unbox Industries, Kasing Lung and so. many. more.

Oh, and did I mention that Thailand Toy Expo is totally FREE to attend? There’s basically no reason not to go. So book that plane ticket, get ready for Bangkok to capture your heart and clear off a shelf or two — you’ll need it. See you in 2020!

Many thanks, Barbara Pavone for your insight to this great convention! Thanks for sharing with The Toy Chronicle! Very much appreciated. You can find Barbara on Instagram HERE.

If anyone reading this recap, and would like to write for TTC in the future, please let us know either via email or contact us via social media. We would love to hear about your experiences attending the different Designer Toy conventions around the world! Hit us up!