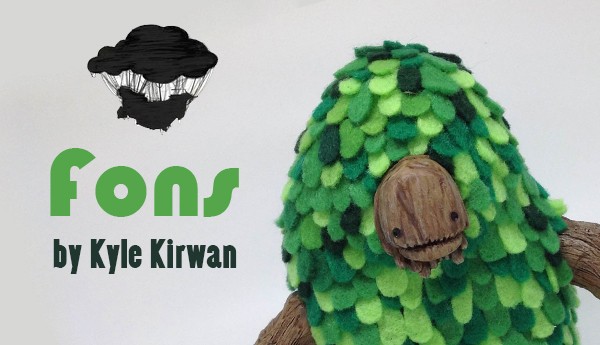 Fons is latest creation by Kyle Kirwan.  He is a 6.5” tall, 7″ wide rotocast resin figure with a felt leaf covered body and solid resin arms. Each figure is 100% handmade and each leaf is lovingly, painstakingly cut by hand.

“Fons is The God of Spring and the youngest of the four Fates; part of the pantheon of lesser gods. The Fates oversee the seasonal transitions in Dor.  They are constantly scheming against each other in a sort of sibling rivalry trying to keep their particular season going. Unlike the other Fates, Fons cares little for the games and plots of his siblings. He is more content to bask in the simple pleasures and day to day joys of life. Sadly this usually means his Brothers Bruma and Calor are easily able to trick him out of time each year. He was nicknamed Driftwood by his favorite brother Tumnus for his carefree and scatterbrained nature. These attributes often come across as irresponsible and frivolous, but those who know him like Tumnus know its just Fons’ adoration of life.

During the Forming, known as the Dragon wars in which all the Gods fought to tame the disorder of Dor, Fons was a fearsome sight. All the Fates carved stories for themselves out of the battles they braved but Fons earned the reverence of all the deities. His gentle nature hides a wild powerful warrior, a terrifying foe to face down. It is only his easy demeanor and kind spirit that keep his brothers rivalry going.

Of all the Pantheons The Fates have the fewest responsibilities.  Of all The Fates Fons has the least of all due to his exemplary service during The Forming.  His only duties are to the Spring, the Forest and the wild untamable places of Dor.

He is little worshiped by the people of Dor, but there are a few Driftwood temples to be found among the Berkonese and Great Bears of the North. Unlike some Gods he asks for no sacrifices, no tributes, no tithes – just a gentle appreciation of life and a willingness to explore the wilds.” He will retail for $79, around £51 and there will only be 5 available online, so get them while they’re hot.  Fons will be available on Kyle Kirwan http://kylewkirwan.storenvy.com/ site on September 14th!

Kyle is currently not based out of anywhere at the moment – his girlfriend, his dog and Kyle are taking a slow route to Designer-Con in a 24ft RV named Sandwich. Along the way they’re hitting up as many designer toy stores and galleries as they can and writing them up on their travel blog (http://daretopee.wordpress.com). Which is pretty damn cool, right! Hopefully see you at DCon, Kyle!