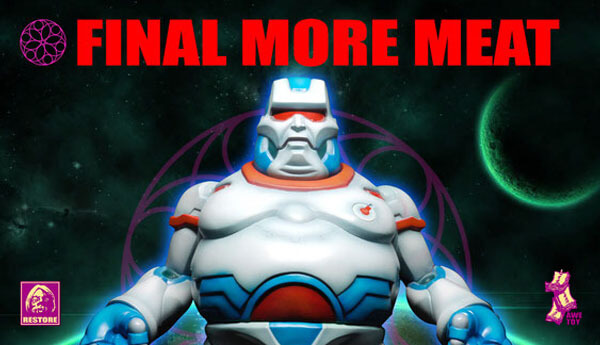 Back in January RESTORE got us super excited with the teasing of FINAL MORE MEAT (READ HERE). The colossal sofubi figure is now ready to drop and here is the full reveal. Seriously guys, this is EPIC!

There’s a neat backstory to this character;

Development has spanned several years, and a budget of several trillion yen was poured.

A robot developed at the time with the best technology punched the earth in the experiment test, since the crack of the earth entered, law such as secretly regulating the use was made, such as the destructive power comparable to the nuclear bomb , The developers were excited about the science of new science although they were afraid.

However, the robot development which was near completion was suddenly ceased due to a certain incident.

After several decades, everyone forgot about robot development. Time has flowed, Dr. K developed Iron Meat and was fighting with the newly born threat with Neo Japan.

The power is amazing but the Intel does not contain Iron Meat turned out to be surprisingly useless as a helper, and the Neo Japan line was always fighting at the limit.

In the year 1984, NEW-DEN, a power plant company, secretly started the development of a robot to strengthen the deterrent power and military power, against the fear of the looming threat.

The development took many years and trillions of yen used.

Developed with the highest technologies of that time, the robot was so strong that it punched a little crack on the surface of the earth during experimental trial.
Laws had to be secretly enacted to regulate it’s use.
The developers welcomed with awe and excitement this new realm of science that compared to the destructive power of a nuclear bomb.

However, just as completion was around the corner, an accident suddenly suspended the development.

A few decades passed, and everyone had forgotten about the robot’s development.
Time passed.

Doctor K developed IRON MEAT, and IRON MEAT fought alongside with NEO JAPAN against the new threats.Now, IRON MEAT was strong … but with intel “not” inside, it became rather clear that that IRON MEAT was not so useful as an ally, and NEO JAPAN and his party always barely won their battles.

Doctor K recalled that he had developed a robot in the past.
He was infact the leader of the robot development team at NEW-DEN that was terminated.

He went to Kansui Park in Toyama prefecture where NEW – DEN ‘s research facility was and found the robot, deeply sealed in the underground.
The robot, developed with the latest technologies at that time, was further improved. 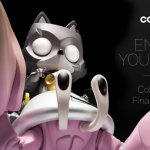 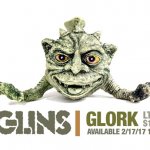