Celebration continues as Poriin lands a blind bag series in celebration of Fenni 1st Anniversary! Back in February, our eyes lit up when we first laid eyes on Fenni original edition by Poriin Studio. The creator who brought you the adorable bunny like resin figure “Toi”, and now Fenni has taken off. 19八3  Toys will be offering you the chance to join in the celebrations. With a total of 12 assortment and Secrets. 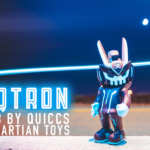