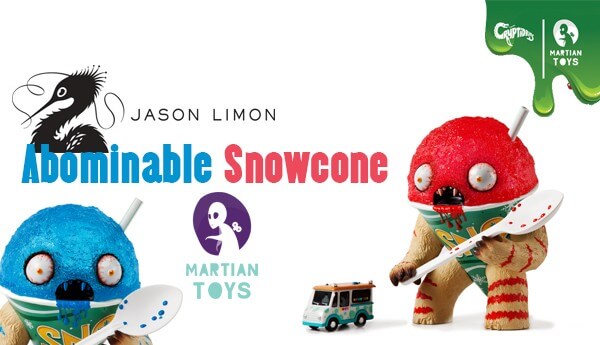 Back in July, Jason Limon x Martian Toys teased the art work for Abominable Snowcone on Clutter Magazine’s San Diego Comic-Con edition. Martian Toys is ready to shake up the vinyl toy scene by bring Jason’s artwork onto designer vinyl toy platform. This is such at great choice to take it onto vinyl, we absolutely love it! We have seen Jason’s Abominable Snowcone on various platforms like T-shirts, phone cases and prints, but this time in glorious vinyl.

From the photos of the Abominable Snowcone art toy it looks spot on with the transition from illustration to a designer toy spoon and ice-cream truck included.  Martian Toys we salute you for making this happen and congrats on having your first designer vinyl art toy.  We can see Abominable Snowcone having various colour ways and just so happens, an exclusive blueberry should be ready in time for NYCC 2015.

The van itself is dam cool too, not detail spared with this production. Packaging is great too.

These will retail at $125 each or 2 for $200 thats around £80 or two for £128, Cherry retail version will be released friday 30th October and Blueberry will be an NYCC 2015 exclusive for now get your designer toy fix at http://martiantoys.com/