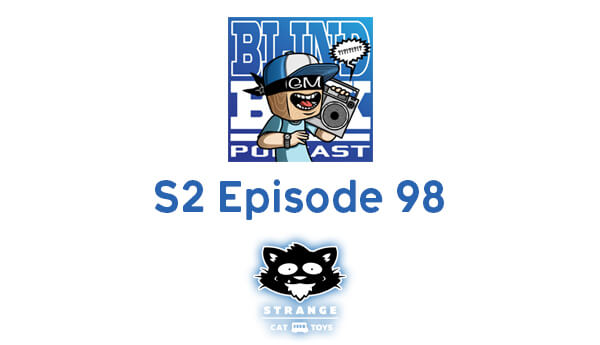 We finally had the chance to check out latest The BlindBox Podcast episode! guest or no guest, GM and Cory from StrangeCat Toys recaps on DTA’s, Five Points etc. It has been a while but it’s nice to listen to GM and Cory have a chat and catch up.

The Blind Box drops on a Monday?!?  Why not, we do what we want.  No Guest!?!?  I SAID WE DO WHAT WE WANT. Ok but really though, GM & SCC hang out and talk about what went down at 5 Points/Designer Toy Awards, what’s been going on with GM & his most recent purchase(s) from the Bats in the Belfry show over at Stranger Factory & also huge news involving a recent release of “Up Up & Away Kyoot” by the Designer Toy Collective & I Break Toys! Press play, open your ears, break out the pen & the pad and do some sketches while you wait for the (no) guest to show up on this episode of The Blind Box!

Points that stood out in this episode