What better way to get involved in some charity fundraising whilst giving you the chance to own something awesome at the same time! Bigfoot and Glow Chomp Charity Release info came in from the lads at Abominable Toys. Meet the next edition of the much-adored CHOMP from the genius from co-creators Connor McConnell and Pixar animator Benjamin Su (with sculpting by Alain with the help of Eric Johns)

The first figure of series 2 will be a set edition number and that series will feature new moulds, designs, and box art on almost every release! Additionally, Chomper will make an appearance before the end of the year and we have huge plans for some cons later in the year as well as multiple artist collaborations. If anything is to go by the previous releases you’ll want to mark your calendars and set your alarms for the release.

Abominable Toys will be releasing a Bigfoot and Glow Chomp figure and anyone who buys the bundle will get a Chomper pin 2 pack for free with their order. In addition to that, Abominable Toys will also be putting original and blank figures back up for pre-order.

Chomp is a fun loving, fluffy yeti, with an abundance of chill. Chomp originated as a quick sketch on a piece of scratch paper and was truly brought to life by Benjamin Su.

This is the final release for series 1 of Chomp figures. Abominable Toys are teaming up with @aquamike23 to do one more timed charity release and donate $5 from every figure sold to the World Wildlife Fund!  This is a 48 hour timed edition pre-order running from Saturday June 22nd at 12:00 am EST to Sunday, June 23rd at 11:59pm EST at https://abominabletoys.com/

All orders placed within that time will determine the edition of this run and they will ship in ~2 months pending customs. They will not ever be available after that time again. Abominable Toys will not be doing waves this time and all figure orders will ship in the same week after being manufactured. Due to manufacturing to demand and sending a donation to charity orders cannot be cancelled so make sure you order correctly during the time period. 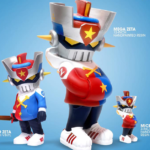