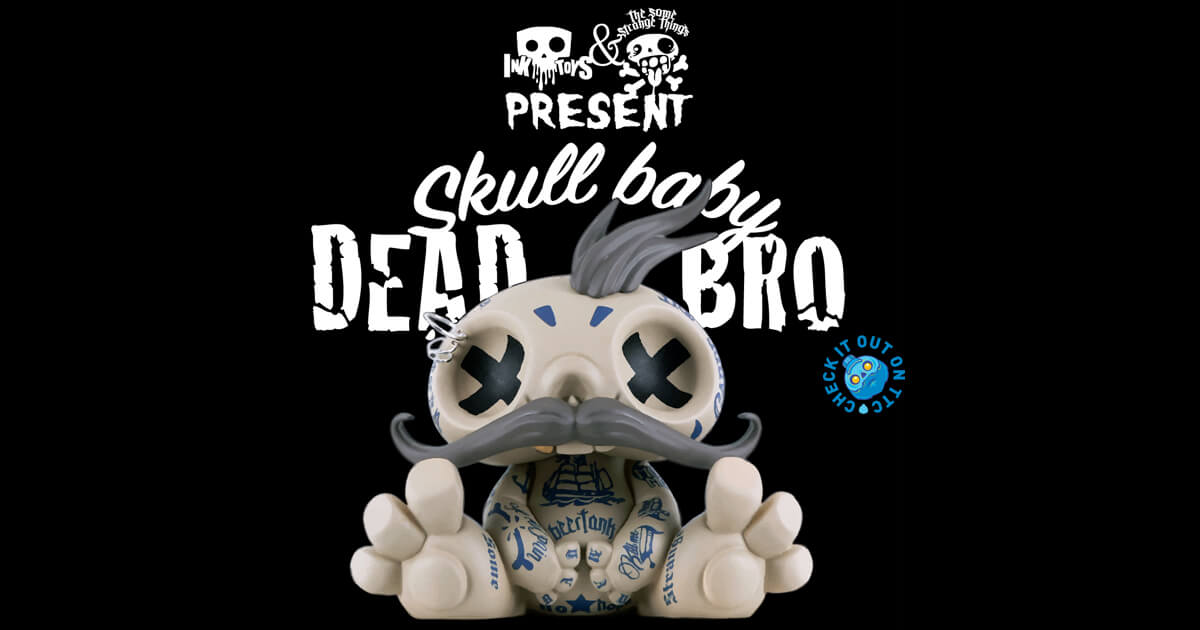 Two worlds come together! Actually two buddies! Check out InkToys Baby Skull Dead Bro custom series, a very fashionable and very inked sweet big head skeleton. A collaboration between Javi Doses aka InkToys and Marcos Lorenzo aka SomeStrangeThings. Based on the lovey Baby Skull made by InkToys and the second in SomeStrangeThings custom Dead Bro series.

This piece was intended to reflect in certain way two different points of view: from one side, it’s like a tribute to those friends who are no longer with us, because they are dead, far away or they have married hahahah!
On the other hand, it’s like a memento mori to those colleagues who where passionated hipsters and now they are no more.

As Javi Doses said, “When Marcos contacted me I already knew that there was going to be an incredible toy, since his stuff had always made me fall in love with them. Just thinking that my SkullBaby was going to be customized in that style, I knew it was going to be a win win, and I couldn’t stay in one single piece”

Marcos Lorenzo said: “I really like the result, I really enjoyed disguising Baby Skull as a serious adult. Moustaches, always moustaches: they are the best. Those Moustaches remind me of Javier’s spiritual inner animal, the bull. Although they look more like buffalo horns… Well, Moustaches. We have some other projects in progress but my mom doesn’t allow me to speak about. No seriously, it was great to tattoo that toy: the first time I saw the Baby Skull I knew I needed to do something with it and suddenly realized it was perfect for my second Dead Bro stuff. I quickly got in touch with Javi and really fell in love with the way Javi sculpts. He is a Zbrush master and usually makes monsters and that kind of scary stuff. But when he makes toys, he makes them the same way I used to draw when I was young, the same look, teeth, expressions,… I feel his art like a second me. Have you seen Nibbles? It’s great!”

We made a little funny cartoon about the meeting between the two artists and the birth of this custom toy. Hope you like it! (Attached below)

InkToys Baby Skull Dead Bro is worldwide released and available as from now at the SomeStrangeThings Store at https://www.somestrangethings.com/STORE/ priced at 150€ (around $168), worldwide shipping.