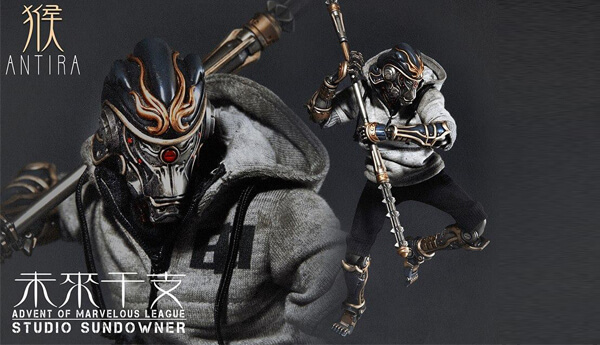 Into 1/6 th SCALE COLLECTIBLE FIGUREs and love of NEO Folklore, look no further as Studio Sundowner is now offering you the chance to own their insane looking Advent of Marvelous League-Antira figure! No bullshit, many of you missed out on Antira so don’t miss this drop once again. Always fascinated with Studio Sundowner style and storylines when using mythology, religion, and sci-fi elements, Studio Sundowner has created an alternative universe, will you join Studio Sundowner’s Universe? The classic Monkey King on steroids.

Our brand new series of creation, Advent of Marvelous League, is inspired by the Chinese Zodiac. Fusing mythology, religion, and sci-fi elements, these form the background of this story in order to create a future world located nowhere.
This year is the Year of the Monkey. We would like to commemorate it with this game. The Advent of Marvelous League is going to launch Antira as the first episode of this saga. Produced by Ethan, FU is responsible for part of the illustration, a Taiwanese illustrator, upon our invitation. In addition, the 3D modeling is completed by a top 3D artist, Feng Hsuan Zhan. As to the coloring, it is designed and supervised by our good friend, Pkking. With our efforts, we are proud to present you an exciting SF game blended with Chinese touch.

《Advent of Marvelous League》
After WWIII, human civilization grows after a nuclear blast. Only 0.1% of the world’s population survived the holocaust.
Many souls are unable to revive by entering the wheel of fortune, wandering between the spiritual world and our world.
The spirits with a strong desire possess other people or an animal’s body, and even machines. They are called as “Armageddon-Atman.” These unstable and violent forms will become the nightmare and disasters of Armageddon.
In the Genesis Era 0143 (2250 AD), Dr. Miles Becker of Human Revival Inspectorate proves the existence of super-psion. And he worked with the Psionic Association to develop the spirit animating technique of transforming psion into stable energy. At the same time, he uses high molecular polymer and micromechanical cell technique to create Adana-Vijnana Mecha so that the Psionic Association can summon souls to become the most powerful troops to fight against the wandering spirits. The twelve psionic bodies summoned by the spirit reincarnation ritual are…
In the past, it has been possible to find the records of these twelve heavenly generals in different cultures, but only in different names in different times and different forms that have been recorded until the end of the world. Now, human culture is encountering its greatest ordeal. Scientists use new science together with spiritual invitation technology to allow these twelve heavenly generals to reanimate into this world.
When Adana-Vijnana Mecha reanimates, it will reflect the forms of psionic bodies. The twelve psionic general will be reanimated in the form of twelve animals in the Chinese Zodiac. With the emotions of people, happiness, anger, sorrow, and joy, the psionic bodies’ abilities will be fully developed in this world through reincarnating as Adana-Vijnana Mecha. Each heavenly general has his own dharma tools.
《General Antira》—the guarding god of the hours of shen (3-5 pm) has a red body, appeared to be in great anger, wearing a monkey-shape crow. According to the Medicine Buddha Sutra
The twelve Heavenly Generals or yaksha have different personalities. Some of them are fierce and some benign. Each of these twelve generals has seven thousand soldiers and dependents, and eighty-four hundred dharma mates. The twelve Heavenly Generals are divided into twelve earthly branches or twelve animal signs. They guard this world in turn 12 hours through days and nights, and the four seasons in twelve months (ancient classic). A small amount of 1/6th Scale《Advent of Marvelous League-Antira》are available online now!
Price：215 USD with international shipping included in the price.
Shipping time: the end of February 2017.
Total production quantity：300
Official Website：www.studiosundowner.com
Chinese Website：http://tw.studiosundowner.com/
The payment will be made through PAYPAL。