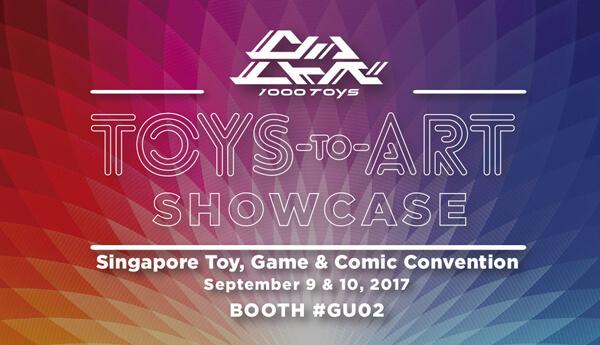 Just days away and 1000toys have released some details of what they will be showcasing at STGCC 2017. Attendees are in for a treat as 1000toys Toys-to-Art Showcase will feature the Mechatro WeGo Custom Show, Live Art & Designer Art Toys. Bringing a roster of International artist to STGCC which features Kaori Hinata (Hinatique) / Deanne George (Sorbet Jungle) / Yasu (Ebineko-ya) / Carlos East (Beast Brothers)

Japanese independent toy maker 1000toys is bringing a spectacular Toys-to-Art Showcase to this year’s Singapore Toy, Game & Comic Convention. The event will be held on September 9 & 10, 2017 at the Sands Exposition Center in Singapore. STGCC is celebrating its 10th anniversary this year. The 1000toys booth will feature the Mechatro WeGo Custom Show, live painting & signings by a select group of international artists and a bounty of exclusive designer toys, art and merchandise. 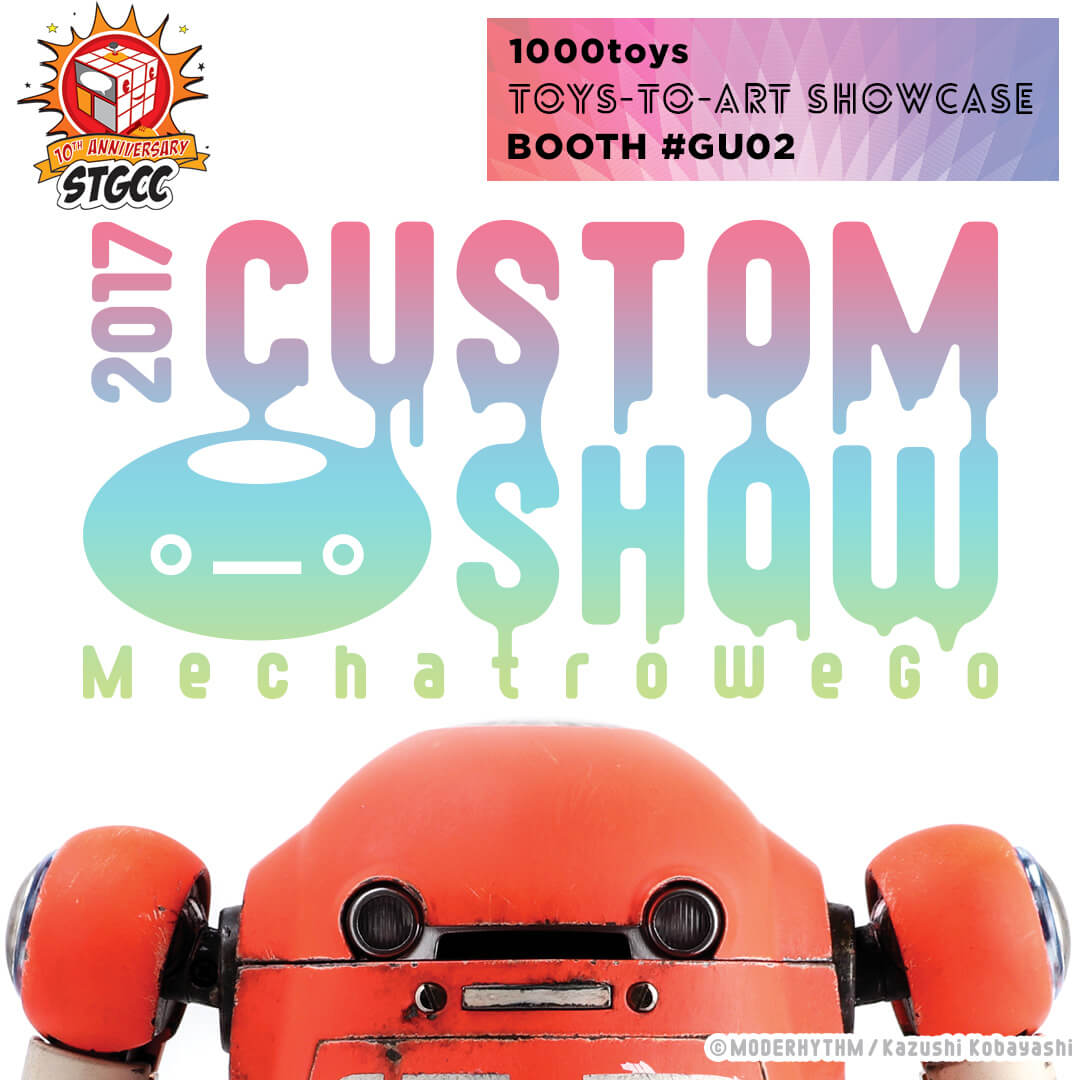 Custom shows are a big part of the Toys-to-Art scene. The Mechatro WeGo custom show has been touring global toy events throughout the year. Featuring Customs by some of the biggest names in the Designer Toy scene, The Mechatro WeGo custom show was born at DesignerCon in the U.S. at the end of last year. Throughout 2017 the show has travelled to ToyCon U.K. in London, Thailand Toy Expo in Bangkok, the 5Points Festival in NYC, Wonderfestival in Tokyo and the next stop is Singapore! At every stop have been adding fresh Mechatro WeGo customs to the mix. For the Singapore Edition of the show we will bring some fan favorites from Jon Paul Kaiser, Luke Chueh, Paul Kaiju, Doktor A PLUS new customs from our featured crew of international artists plus some surprise guest customizers. 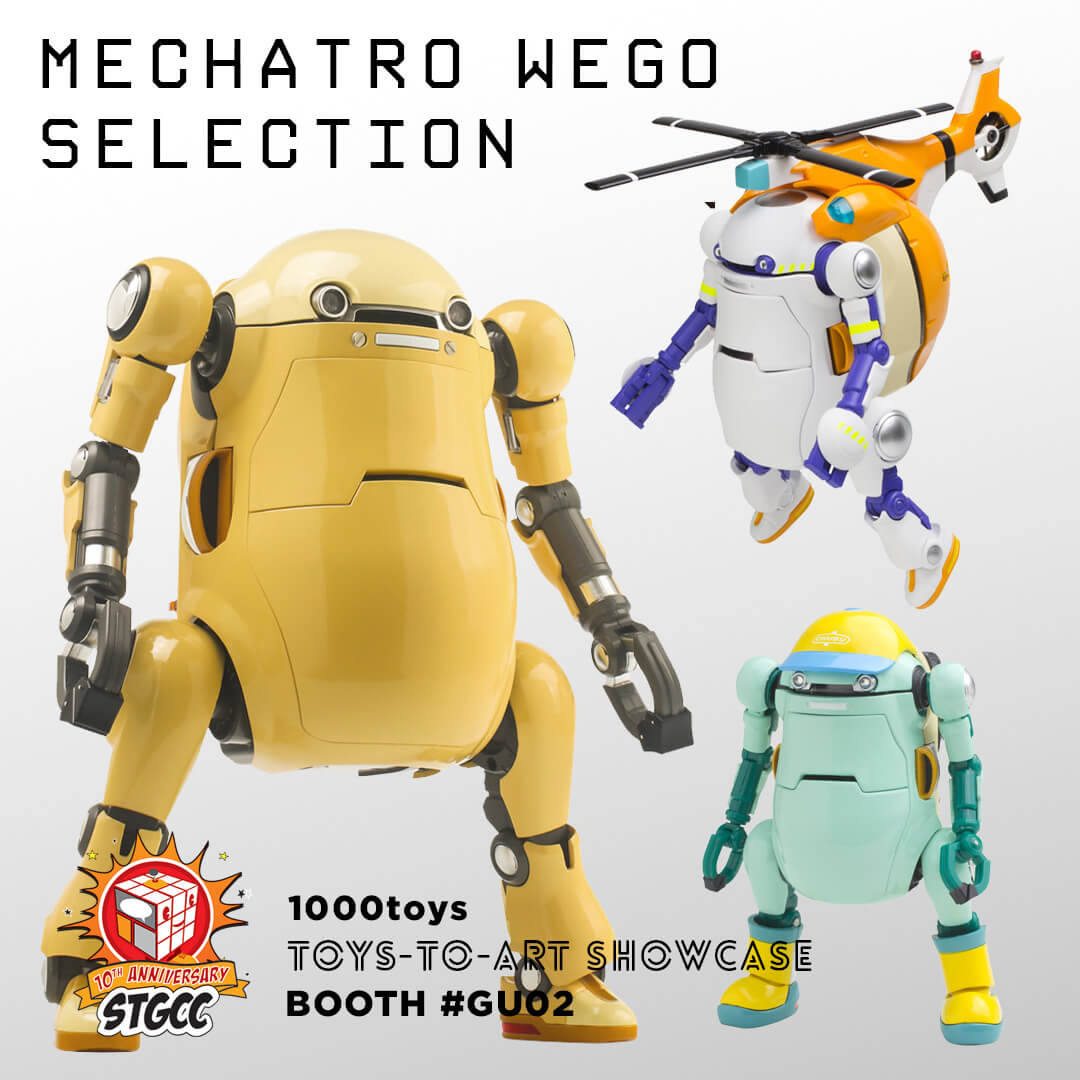 1000toys will be bringing event-exclusive clear versions of its ground-breaking Synthetic Human figure in both 1/6 and 1/12 scales plus a selection of the Mechatro WeGo toys in both large and small sizes. 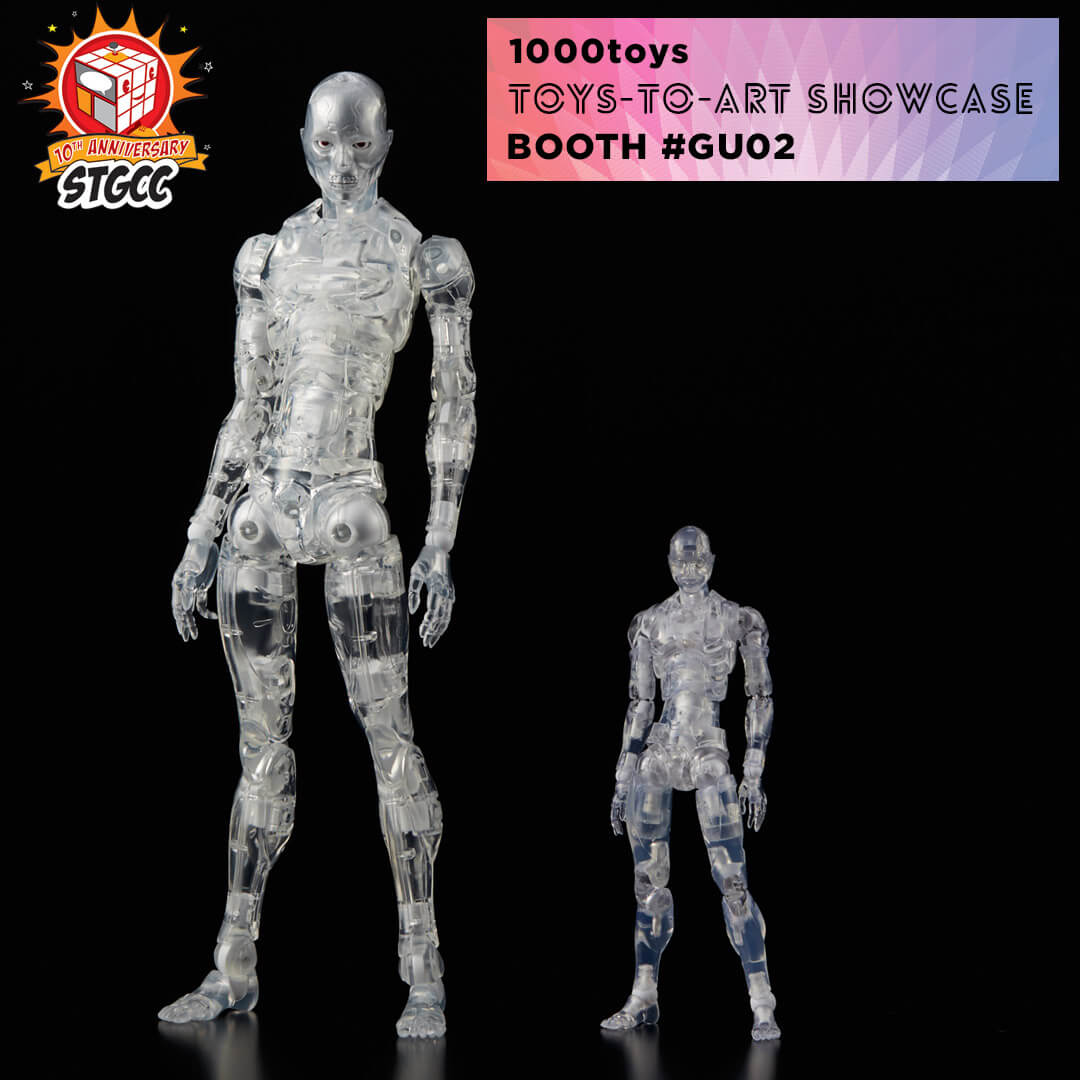 There will also be a selection of vinyl toys for sale by some of Japan’s top creators including Kaiju Dan, Hikari Bambi, Teresa Chiba and more! If you are in Singapore this coming weekend – please stop by STGCC at the Sands Convention Center and say “HELLO!”

Artist Profiles Kaori Hinata (Hinatique) Kaori Hinata is a Japanese Artist, Illustrator and Character Designer. The overarching theme of her creative works is “The Cuteness of antiques and Nostalgia”. She loves drawing pictures, live painting and making Knick Knacks in felt, ceramics and other materials. Her newest original character is called “Morris – The Cat with Antlers”. Morris is a cat boy – but he is different from the average cat because he has big antlers on his head. “Morris” has proved to be a very popular character and will be released as a sofubi figure this fall.

\Additionally, the character will be featured in the Medicom’s VAG (Vinyl Artist Gatcha) Series 12 and has been featured in mini picture book also released by Medicom. This is Kaori’s first time to exhibit in Singapore! IG: https://www.instagram.com/hinatique/

Deanne George (Sorbet Jungle) Deanne George is the founder and lead designer behind the wildly popular U.S. based brand, Sorbet Jungle. Having been introduced to art and animation as a young child, Deanne found herself drawing incessantly throughout her entire life. Never missing a chance to grow and experiment with new media and tools, she eventually found her passion in character and toy design. Best known for their instant hit character, Croconana, Sorbet Jungle combines cute animal characters and creative word play into a smile invoking brand that has become immensely popular on the anime-con scene and is crossing over into the designer toy scene! This is Deanne’s first time to exhibit in Singapore! IG: https://www.instagram.com/sorbetjungle/

Yasu (Ebineko-ya) Yasu is a prolific Japanese artist, illustrator, character and product designer from Nagoya Japan. Under her brand name “Yorozu zakka Ebineko-ya” , Yasu’s original character designs come alive in a wide variety of media including plush, resin, soft vinyl, drawings, paintings, messaging stickers, and more! Her trademark character is “Ebineko” – a half cat and half shrimp character that seems to have gotten himself into some tempura batter at some point. “Ebineko” was released as a soft vinyl toy earlier this year – Yasu sculpted the figure herself and painstakingly hand-paints every release. Her figure line-up has recently expanded featuring several new soft vinyl figures; “Same” – the three eyed shark, “Yamorin” – the Gekko Dragon plus a cute mini version of “Ebineko” with more on the way. This is Yasu’s first time to exhibit in Singapore! IG: www.instagram.com/yasu.ebinekoya/

Carlos East (Beast Brothers) Born in an Aztec temple deep inside the jungle of Mexico, The Beast Brothers spent most of their childhood developing their unique and distinct style of art. Through the years, this royal pair has used their mighty twin powers to create memorable works for Nike, Kidrobot, Reebok, Coachella, Bacardi, VANS, among others. They have also travelled the world teaching customizing techniques to fans and aspiring toy designers. This will be Carlos second time visiting STGCC – the first time was in 2013. IG: https://www.instagram.com/thebeastbrothers/ 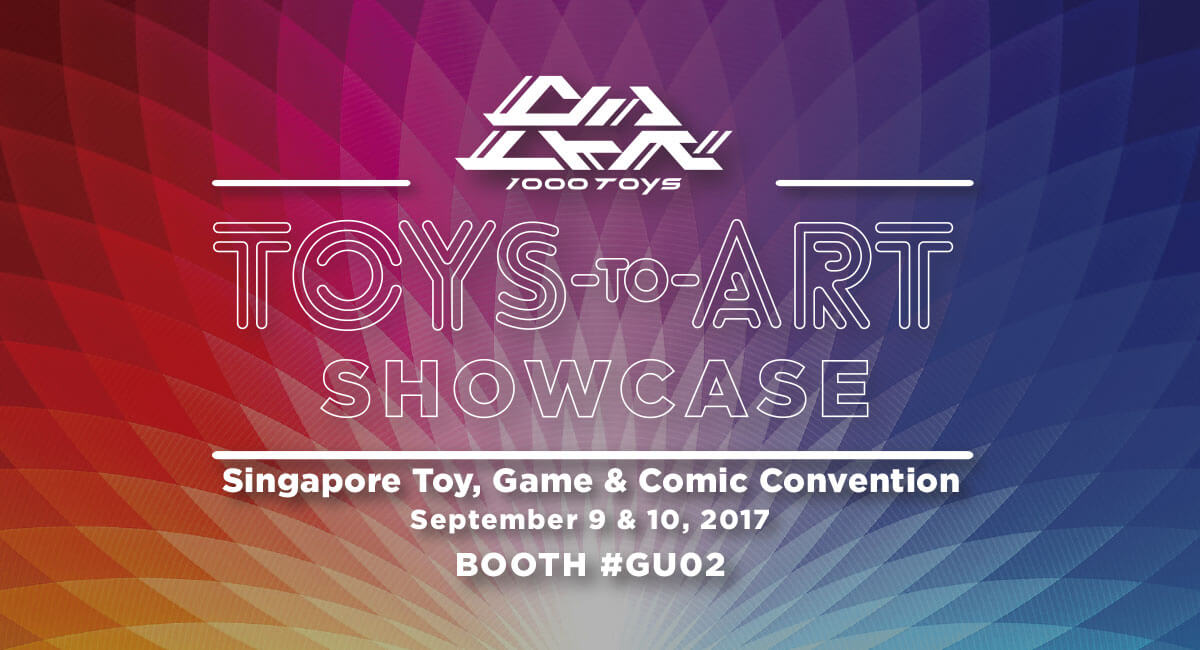 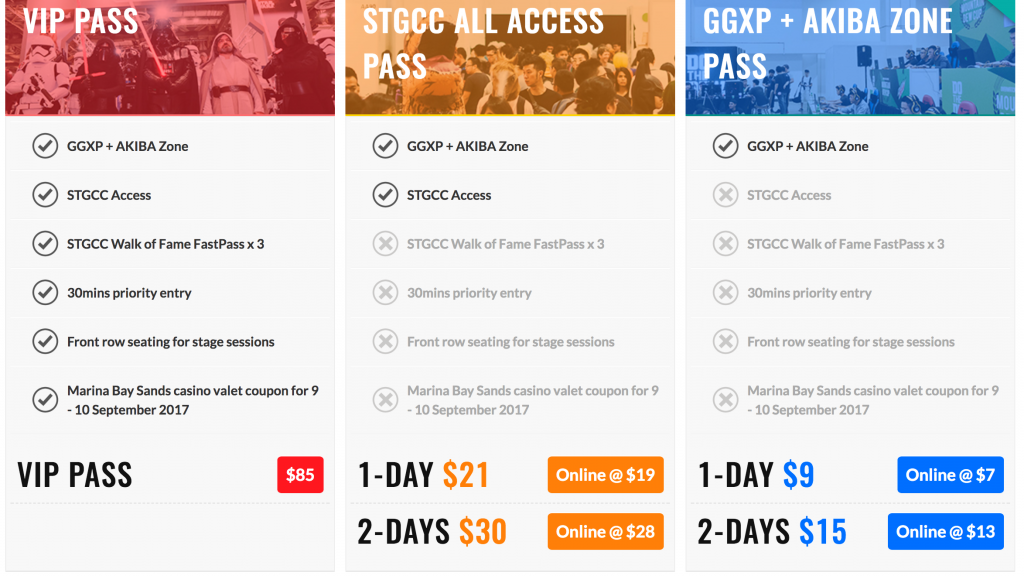