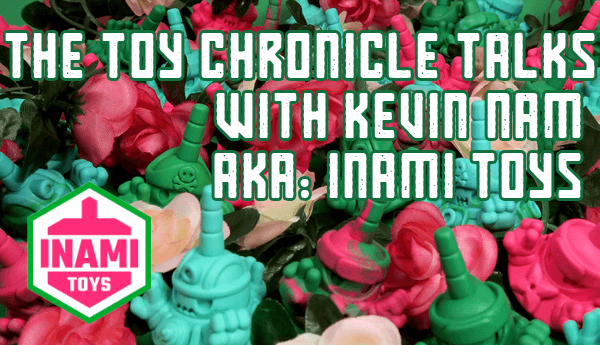 It’s been a while since we last did an interview, August in fact. That’s far too long, right? We thought we’d rectify that by speaking to one of our favourite artists right now – Inami Toys! Inami Toys are building up a great reputation & name for themselves. You may have seen us post about their Tumble Top releases, they are by far one of the best resin releases out there at the minute. We’ve met Inami Toys (aka Kevin Nam) at the past two NYCC events, and he is a genuinely nice chap. We figured you guys would want to hear more about him and his journey so far.

Hey Kevin, thanks for taking the time to speak with The Toy Chronicle. How are things?

Thank you for the interview and for all the support! The last few months have been really hectic but super fun!

Many of our readers may know you as Inami Toys, but for those that don’t know, could you give us a brief introduction to Kevin Nam aka Inami Toys?

I’m a toymaker from Brooklyn, NY and I trained under Peter Kato at the Cortes Studio. During my time as his apprentice, I learned hand-sculpting, mold making, and resin casting. Inami Toys is the brand I created to introduce my toy concepts to the world. I think of it as an amusement park that fits in your pocket. 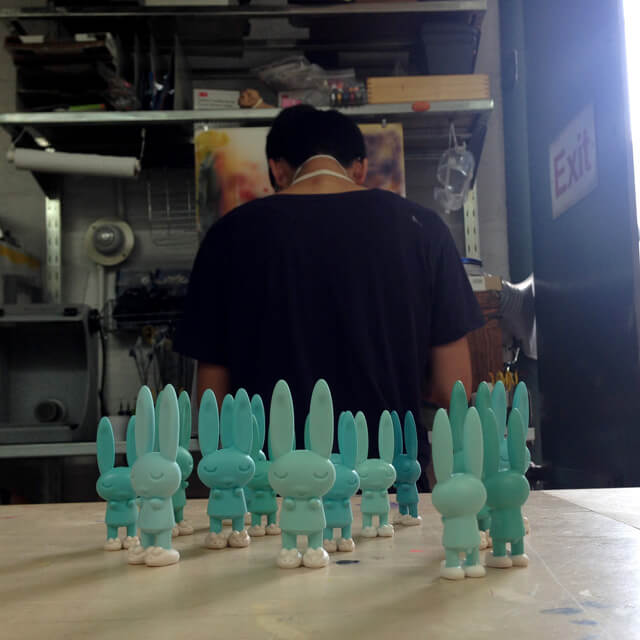 One of many highlights at NYCC this year was the sell out of your Tumble Tops over on the myplasticheart booth. That must have been a great feeling, right?

Oh man, that was probably the best moment of 2016 for me! The folks over at MyPlasticHeart have been really supportive of my work ever since I started out so I’m glad that my first sell-out was with them.

It was great to see so many interested faces when you were doing your signing at MPH booth at NYCC, do you think that having the one of the only playable resin ‘toys’ on the market right now helps to capture the imagination a little bit more?

Definitely! People really like the idea of a playable art toy. It was the first time that I got to demo my tops and that really engaged people, even those who didn’t know about the designer toy movement. Rock-paper-scissors is a game played around the world and spin tops are some of the oldest toys in existence. Taking those two well-known concepts and combining them with characters is something new and fun for people. But I’m always trying to take my designs further to keep it fresh and exciting! 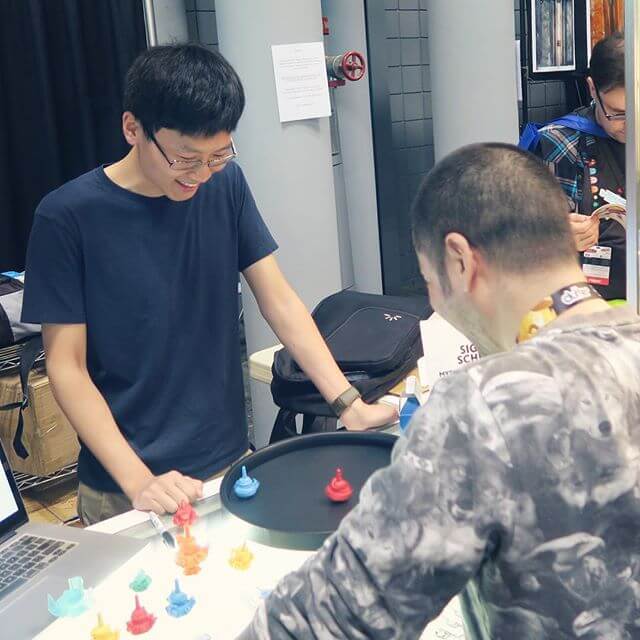 Talking of Tumble Tops, talk us through your inspiration for these and how you came about the idea?

It’s a bit of a long story. The Tumble Tops are the 4th generation of my Rock-Paper-Scissor spin tops. I think this idea of a playable art toy was always in the back of my mind. In 2013 I attended NYCC for the very first time and that year they had a couple of designer toy panels. One of these panels took questions at the end and mine was “Are there any ways to make toys more playable without adding moving parts?” He probably won’t remember this but Frank Kozik was one of the speakers and he had an interesting answer. He told me “It depends on how good of a designer you are.” and this left a deep impression on me. Then in late 2014 I had just finished my apprenticeship with Peter Kato and he gave me a test. It was to create something entirely on my own using my newly acquired toymaking skills. I was really unsure of myself at the time and this uncertainty made me think about how chance plays a huge role in life. Even meeting Peter and him taking me on as his student was really by chance. I was really into robots and I liked the concept of a character with three arms so the game of Rock-Paper-Scissors immediately jumped into my mind. It wasn’t until I started sculpting the character that I realised I could integrate a handle into it, thus allowing it to become a spinning top. With my newest figures, I named them Tumble Tops because I wanted to express how different people have their own experiences in life that shape who they are. Life can be unstable but it can also lead you on unexpectedly great journeys! 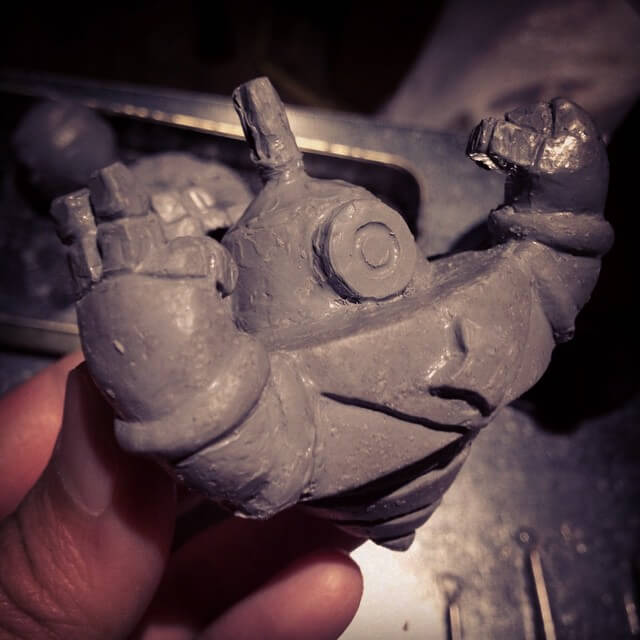 TTC: If you’re looking to purchase your own Tumble Tops, myplasticheart have the latest Inami Toy release from DCon available on their store HERE priced at $11.99/£10. There are also some of the older Tumble Top versions in GID colourways, which can be purchased HERE, again for $11.99/£10 each.

Tumble Tops are so beautifully crafted; how do you get them looking so perfect (almost production-like)?

Thank you, that means a lot to me! Well, it all starts with the prototype. At first, I was hand-sculpting my master models but now I use 3D modelling and printing. That transition was quite a journey in of itself but it’s given me the tools to further refine and streamline my process. I spend a lot of time perfecting each design and keeping everything balanced. Once I have the 3D prints I repeatedly prime and sand them until I achieve as smooth of a finish as possible. I then take those perfectly smooth pieces and make molds from them. When I cast the resin pieces I sand and polish them using a lathe which is basically a machine that holds round objects and spins them extremely fast. I’ve started a YouTube channel where I document my process and you can see how I made the Tumble Tops. 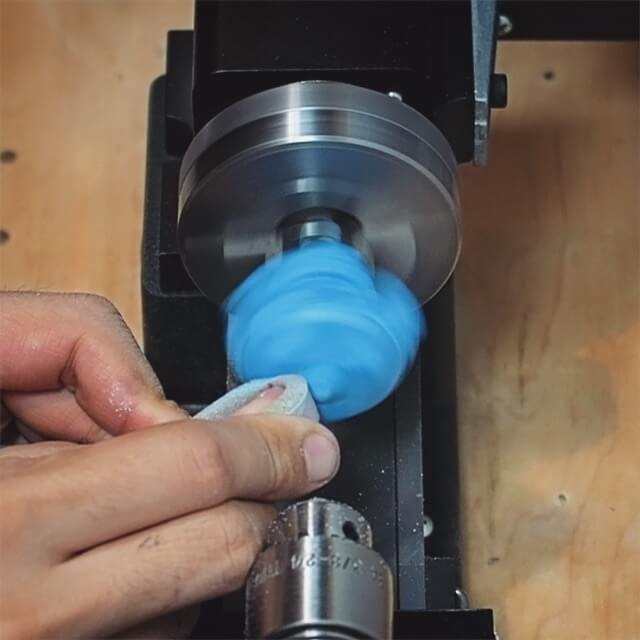 You guys seem like you have quite a tight knit krew over in Brooklyn, what with Peter Kato, Seulgie, Andrea Kang all putting out amazing pieces of art. Do you guys hang out and throw ideas around/help each other out?

Yes, I feel extremely lucky to be close to so many fellow artists and toymakers. They’re such great, hardworking people and talented at what they do. We hang out a lot and always share new info and techniques. Even after finishing our apprenticeships, Peter has been such a wonderful mentor and is always giving Seulgie and myself good advice. It’s so helpful to have like-minded people around to bounce ideas off. I can’t imagine where I’d be without them! 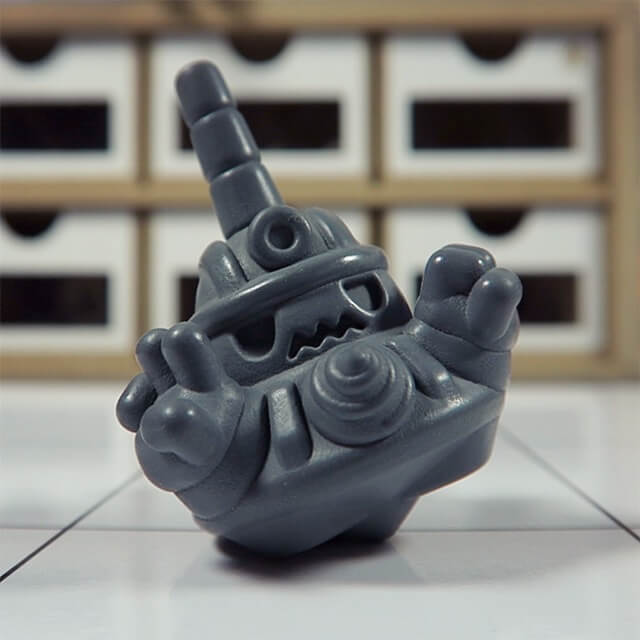 Do you have any exciting plans for 2017?

As always I keep trying to perfect my tops in any way I can. One of the challenges of making playable art toys is that while I can be as creative with the characters as I want, I still have to make them function properly. And moving to 3D modelling has really taken that to the next level. I plan to improve the designs and develop my world of characters even more. In the meantime, I will keep producing the Tumble Tops and get them more well-known. I’m going to make more YouTube videos to share the knowledge of making toys and show people how much time, effort, and skill goes into the craft. Also, I hope to go to Designer Con next year and finally get to meet some of my fans and the amazing artists on the West Coast!

Do you collect Designer Toys yourself?

I used to collect a whole lot of ThreeA figures and sofubi. I like pieces with interesting manufacturing techniques or features like marbled colours, GID, glitter, magnetic joints, interchangeable parts, etc. Nowadays I really enjoy blindbags/boxes and capsule toys because of that element of surprise. And for obvious reasons, I’ve started collecting spinning tops.

Do you have an artist you’d like to collaborate with?

I definitely want to do some kind of group collaboration with Peter Kato, Seulgie, Andrea Kang, and Stickymonger aka Joohee Park. In my own research, I found this wooden toy craftsman in Japan named Mr. Masaaki Hiroi. He’s 80 years old and has been making traditional Japanese Edo spinning tops for decades. I believe he’s created over 4000 different types of spin tops but I bet he’s never seen a Rock-Paper-Scissor top! I really want to travel to Japan someday and meet him to discuss all kinds of ideas together.