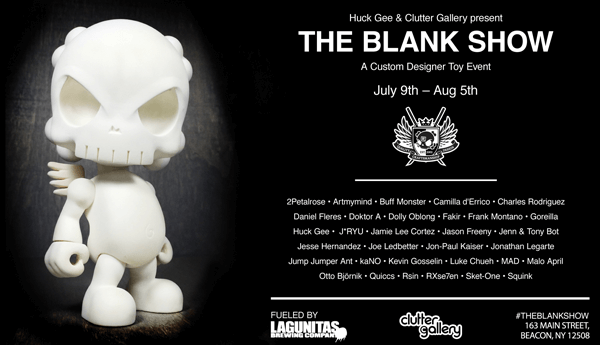 Following the release of Huck Gee’s 15″ neon-green delightful Blank earlier this week, Huck is back making headlines but this time in New York at Clutter Gallery! Huck is bringing the heat. Taking his 7inch Blank platform, rounded up some of the best Designer Toy artists on the globe and got them to splash their art. There are a number of preview or WIP shots floating round the web from several of the artists involved. We’ve captured them below.

This is gonna be one helluva show. The opening reception will be free to the public and take place on Saturday July 9th from 6-9pm. The works will remain on display at Clutter Gallery until August 5th, 2016.

The Clutter Gallery sends out a newsletter to all users who are registered to the Gallery Preview List, which allows the recipients to view and purchase works before the exhibition opening. To register, please follow the link below: