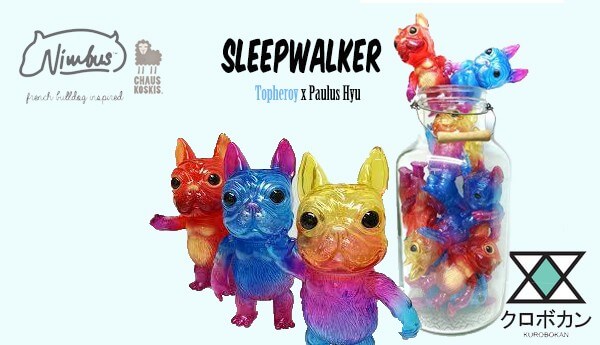 The latest versions of the Sleepwalker are customs from Chris Douglass AKA Topheroy that are set to be released this month. The 3 new colour-ways will be released and edition of 10 per colour way. Having the mighty Chauskoskis sculpt the Sleepwalker, Paulus Hyu was always on to a winning design and final outcome. With Paulus attention to detail he’s chosen to go to Japan in search of perfection with a Japanese company kurobokan to produce and Velocitron manufacture the Sleepwalker in soft Japanese vinyl. The three Candy Crush versions will be available at http://kurobokan.bigcartel.com/ on January 2nd, 2015 at 10:00PM Pacific Time. There are three colorways, limited to 10 pieces each. It will be sold as random. To guarantee the set, you must order three pieces .

6.5? sofubi made in Japan produced by Kurobokan. *header illustration by @javierjimenezxl
*figure sculpted by @chauskoskis

While I have your attention Paulus Sleepwalker Nimbus will be taking part in the USA for the ToyArtGallery CHRISTMAS KAIJU Group Show he is what has on show at TAG.