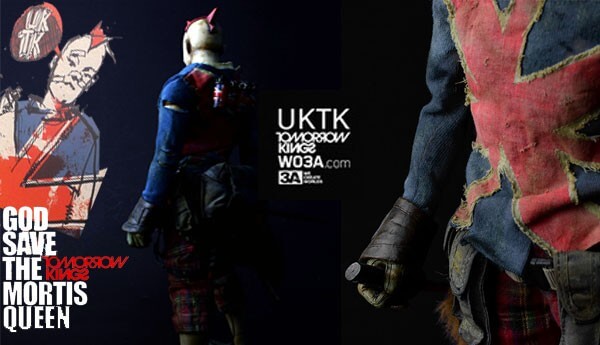 ThreeA’s involvement in supporting the UK demand with the help from Wai Man from OneSixthBruce, Ashley wood designs a TK especially for this years 2014 ToyConUK! exciting times for the ThreeA collectors and Wai Man must be pleased with the teaser shots that have been released so far. 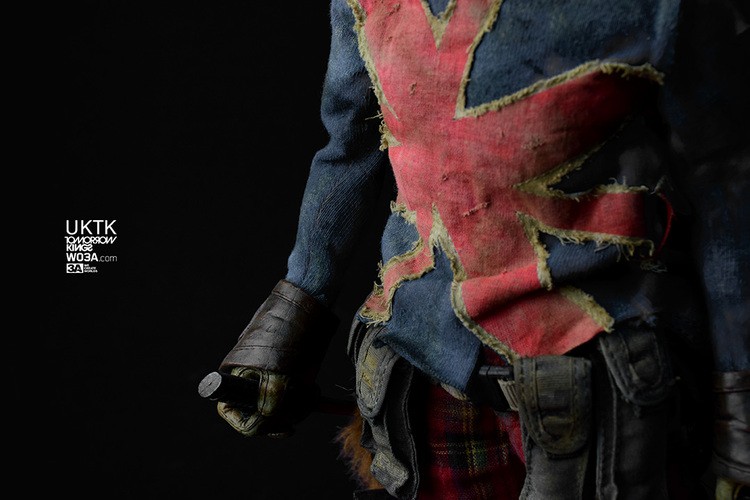 Digging the Tartan trousers and the denim look of the top 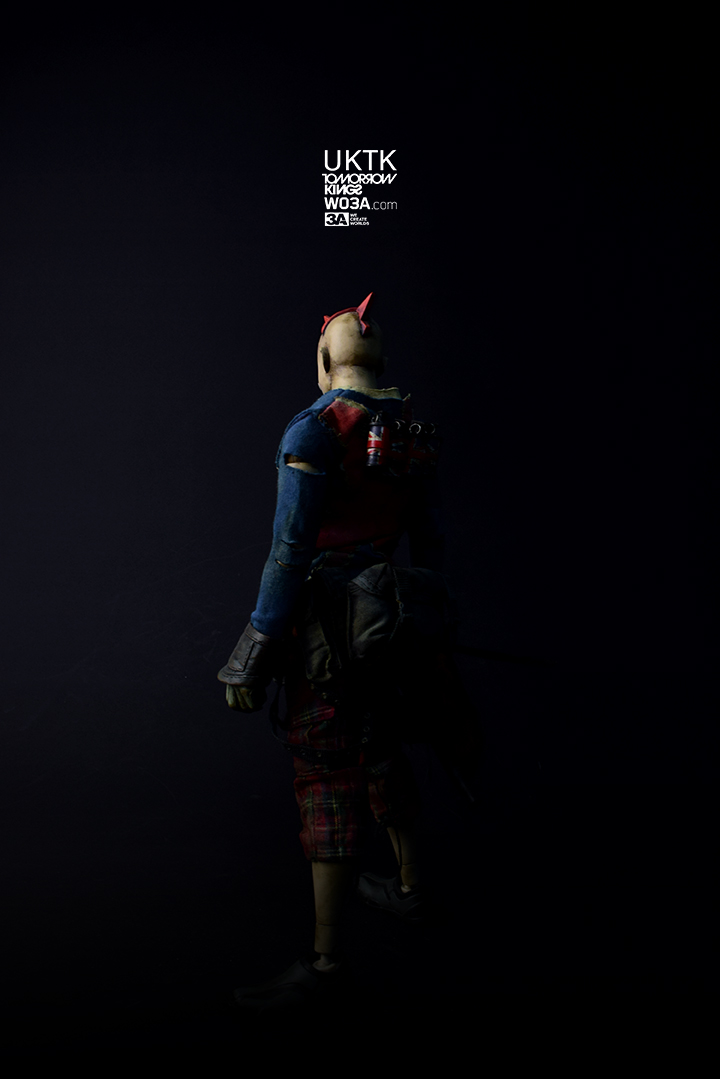 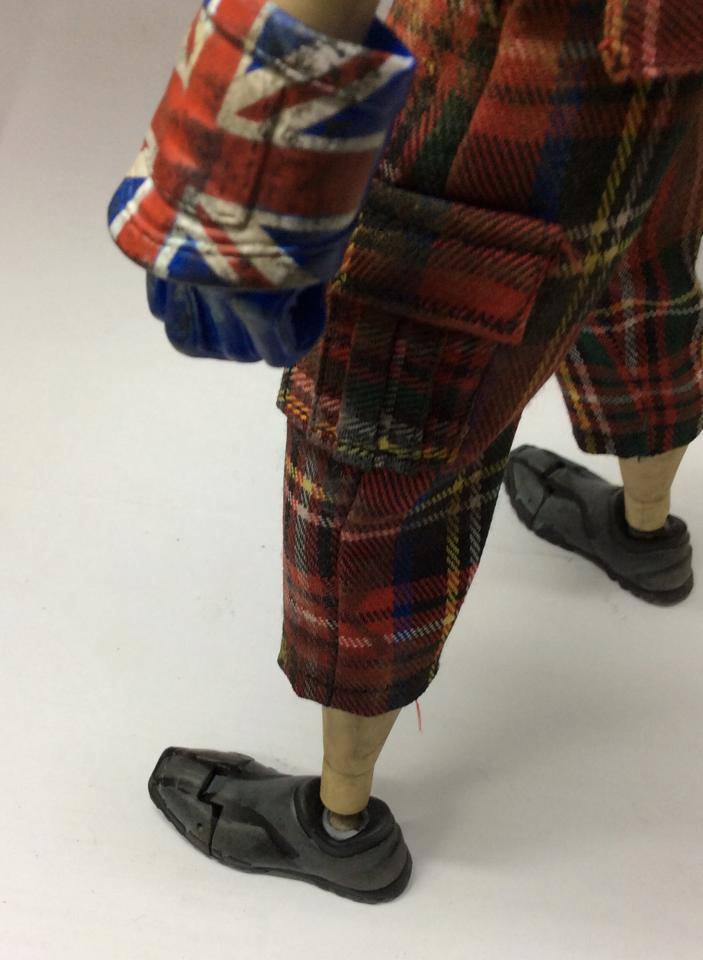 Nice little touches with the punk hair and the flag grenades. All the teaser shots look promising and no doubt Ashley wood design will be exceptional 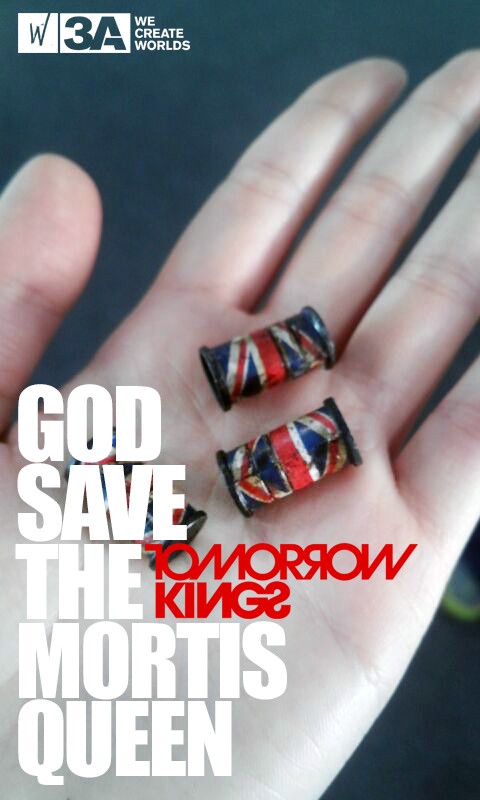 Q&A to Ashley Wood shed a little more light on the UKTK.

Q: Any word on how limited is UKTK for Toycon and will there be Bambalandstore variant of him?

A: 50 for toy con, and there are some bamba version, all different, but at last you get a chance at a mohawk TK!

Q: Can you please tell us more about UKTK character, like his name, story and whether it’s coming with EDO style hands?

A: Original hands, UKTK was deployed due the Manchester war bleeding out into the general UK, TK not only fight the MORTIS but are general peace keepers, especially DEVIL SOCKS!

Q: I dig the punkish look of UKTK. We already have Golden Doplhin and the question is: will 3A release more figures influenced by punk imagery? Also will there be a UKTQ?! That would be awesome!

A: Well Punk is important to me, on the level of the thinking behind it, DIY and shit, thats a major part of my ideal, also when I was a kid, and Punk was in its visual golden period, it was kinda scary, yet cool, alienating yet saying, join us, the world is wrong etc… Its fun to dip into that world, still looks good today! UKTK is go!  I think PUNK for me has always been a wink and nod that you are not alone, when you feel outside what the immediate surroundings offer! Go put on a Buzzcocks record, by some Docs, tartan skirts re timeless..

For all you lucky people who are attending the now SOLD out ToyConUk 2014 you have a chance to buy a UKTK. . So heres how to get a ThreeA UKTK. Head over to the OneSixthBruce Booth at ToyConUK and get a  raffle ticket (strictly 1 per person) charging £1.00 for each with 100% of the raffle sale going to OSB’s chosen charity Cancer Research UK  and just wait for your lucky number to be drawn, simples. Warning to All FLIPPERS the Triads will hunt you down! we will give you a more specified details real soon, finger crossed sometime this week. Wai Man did say a few will be sold on eBay but  100% of the proceeds will going to Cancer Research. (THATS HOW HE ROLLS! ) 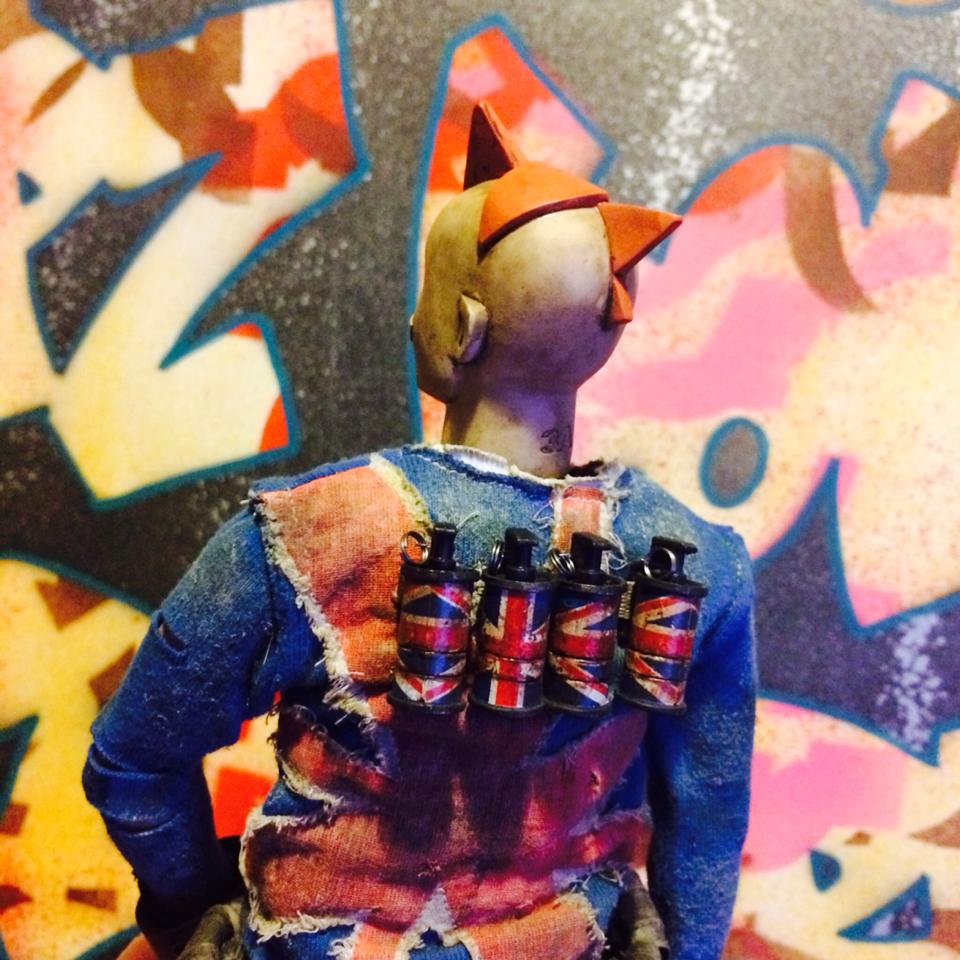 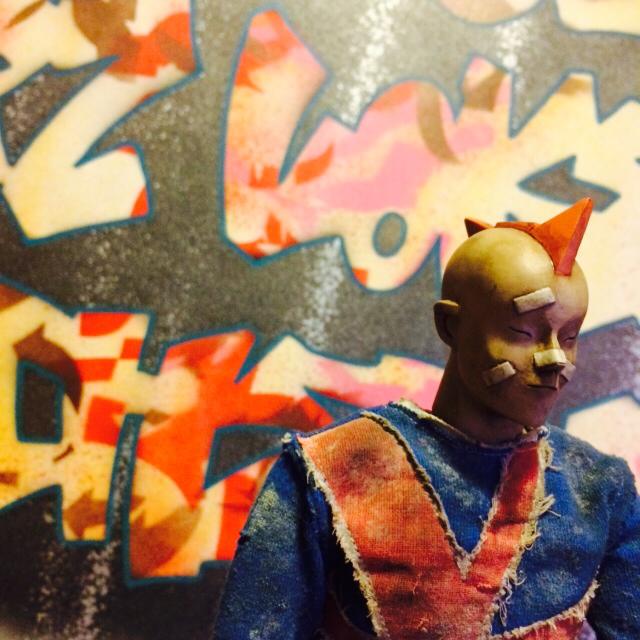 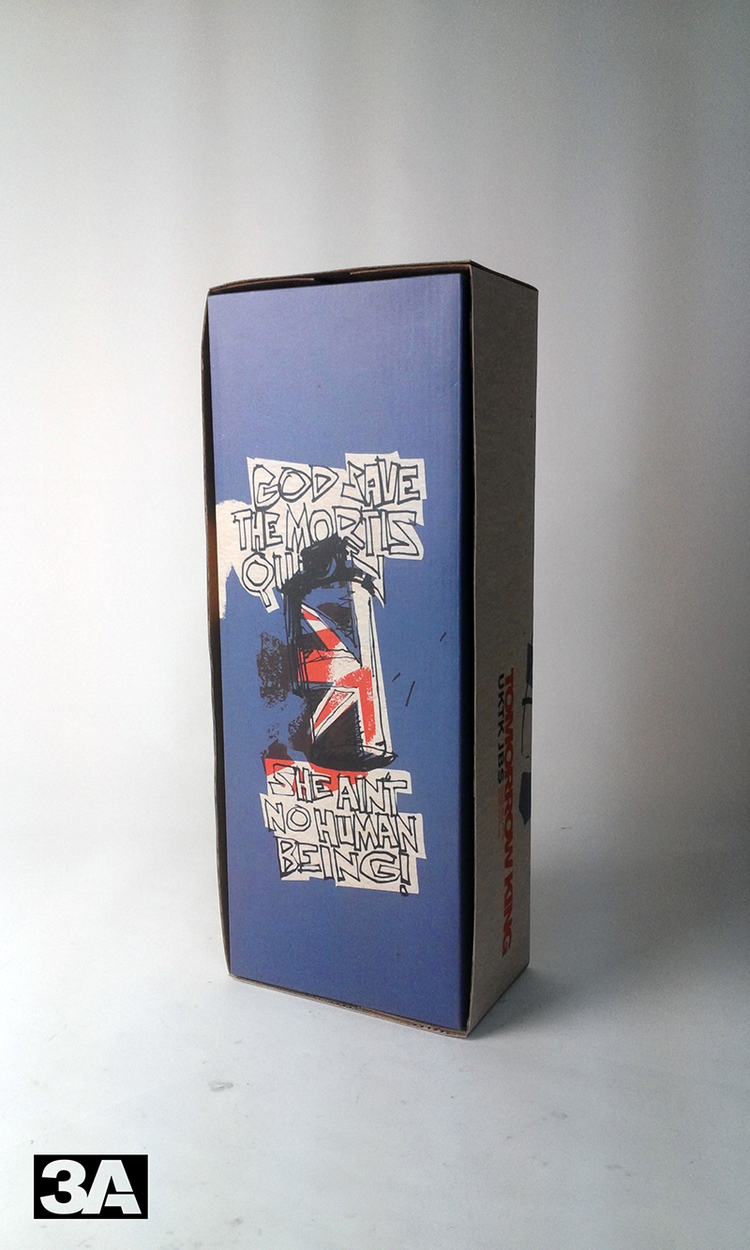 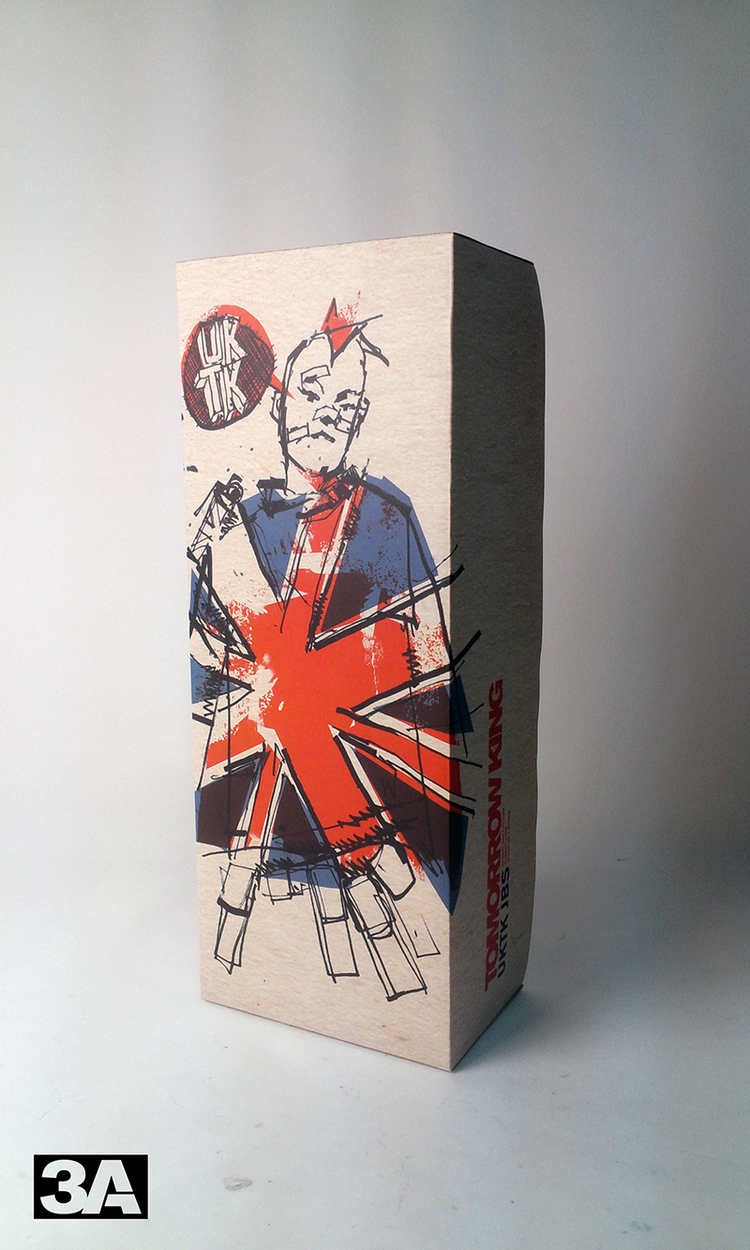 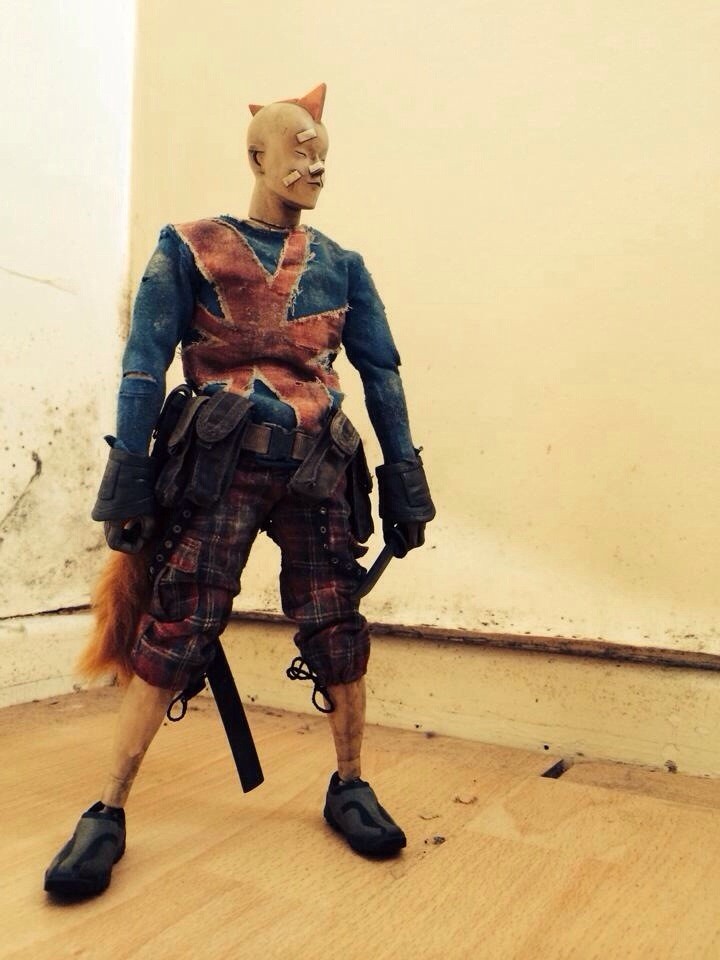 Myself will be helping out at the OneSixthBruce double booth with a stab proof vest at ToyConUK this year and of course will be at our own Toy Chronicle booth so don’t forget to come and say hi. A little article from OSB Via our friends TenaciousToys who he blogs for.

To those who know me, me as OneSixthBruce here in UK, will know that I am a collector of 3A as well as an official 3A dealer, 3A retail has been a staple on OSB almost as soon as OSB was set up. Ive always planned and have done in the past put on a display of 3A at UK conventions, such as the London Film and Comic Con, normally mixed in with other manufacturers, like Hot Toys and Enterbay Not many dedicated displays have been put on, in May last year UK artist and 3A collector RYCA did put on fantastic show at the Roctic East Gallery, Brick Lane, London, so following on from that, very early on I booked a booth at ToyConUK  – UK’s dedicated designer toy convention. Some have asked me why I planned to set up a booth at ToyConUK and not at a bigger, larger convention like I use to show at like LFCC. 1. I have to be honest, the UK convention scene is not like the ones in the USA or other parts of the world. It got to the point where most of the people attending only attend to get photos and autographs with the guest, and with discussions I’ve had with many UK dealers, the huge investment made to put on a booth, the return is not that great! I’m not being negative in any way to the UK convention scene, its great day out but as a business with OSB its got to the point of not being worth it, so for the past few years I’ve not attended any UK cons. 2. I have found that many many designer toy collectors also collect 3A or are starting to have a keen interest in 3A, so rather than attend a big convention, I was more than happy to show at a much smaller convention with like minded attendees.

Sale procedure for UKTK ToyCon Exclusive raffle
Raffle tickets are £1.00, which will be donated in FULL to Cancer Research UK, the raffle gives you a chance to then buy the UKTK if your number is drawn (not to win the TK)
Cost of the UKTK is £110.00GBP
STRICTLY ONE PER PERSON – ALL PAYMENTS CASH ONLY
Raffle tickets will be available at the booth from 11.30, draw will take place around 2.30 at the booth. If number is called and no takers within 10 minutes or so, another ticket will be drawn to replace it.
To those attending, Good Luck.
To those that are unable to make it but want a chance to score a UKTK, there will be an eBay auction where 100% of the sale will go to Cancer Research, Link to bid will be posted next week.
Wai Man
OneSixthBruce For more info head over to OSB Via Website Twitter Facebook

(photos and information from OSB)