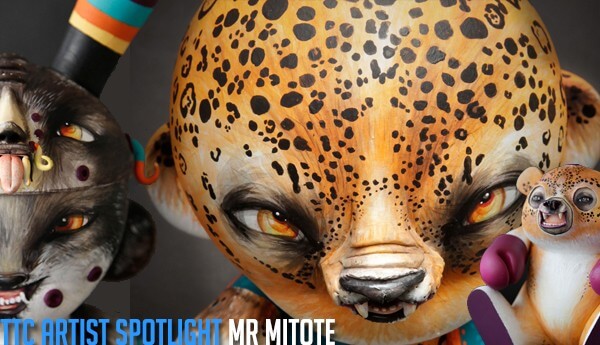 Versatile is a word that defines, only in a minimum difference in the scale of Pantone, Mr.Mitote. He is a man who has the distinction of being a great lover of nature, animal advocate and fierce critic of daily events related to society, but above all, I is passionate about design and illustration, que is Characterised for being Filled With worlds for children , abundance of colours and animals. Since 2005 Began making Mr.Mitote costume illustration and art, capturing a special technique full of textures, fur and concepts based on nature.For him, sculpture is a way  that has the Ability to give your work a more realistic look.

This custom Munny called Callejerito customised in 2010 shows the level of detail and the gorgeous brushstrokes. Also adding his sculpting work. Mr Mitote has released a couple of mini series which are custom 3″ Kidrobot Dunny’s and even on a 3″ the level of detail is top rated stuff. Mr Mitote is clearly on top of his customising game, cannot wait to see the next series he comes up with.

Meet Munny Kong another 2010 custom which shows that he doesn’t really need much sculpting work to show off his skills. Back in April this fun Tigers family custom series. The darker side of Mr Mitote is Xagu Demonio custom (All Images and Info lifted from Mr Mitote website)