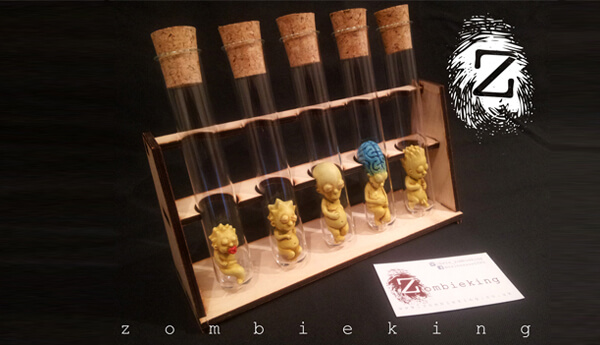 Almost 2 years since we’ve written about UK’s Zombieking. Ever since we discovered Zombieking work back in February 2015, we knew Zombieking had the demand for more of his totally crazy and pretty unique work. The UK-based artist has taken his Test-Tube series  and given it a new extreme twist and it works so well.  Chris’s love for absurd foetal specimens had uncovered some embryonic samples from the “Tree House of Horrors” exhibition at constellations gallery, Liverpool back in 2016 and he’s put them online for you to buy this week!

They were sourced from a stereotypical nuclear family in Springfield, USA.

Here we have some rather interesting foetal specimens…

I cultivated these particular embryos from DNA samples which were sourced from Springfield USA (following widespread testing of all inhabitants after a suspected nuclear power plant incident). I am led to believe they share a genetic heritage, though my own test remain inconclusive.

The official procedure with human(?) genetic material such as this is to humanely dispose of the things. however, I understand there is a black market on which these may fetch a pretty penny, so i now offer them up for sale… 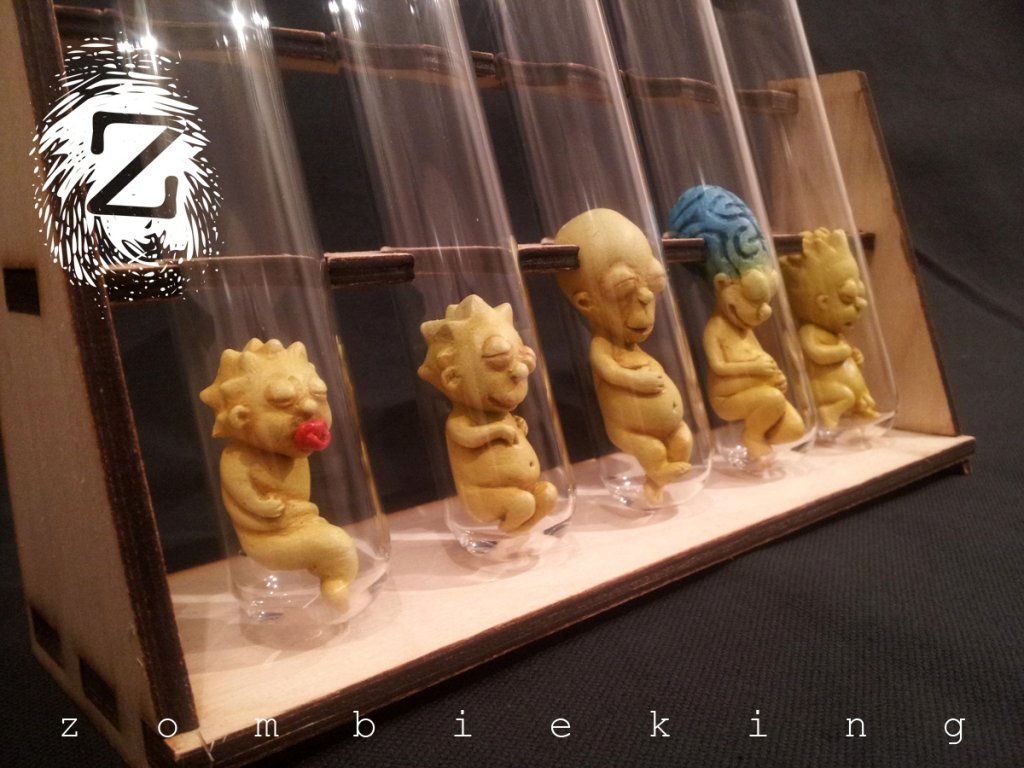 Should you make this purchase, you will receive:

– 5 individual specimens as shown in the accompanying photos.
– they each come in a 150mm long test tube with a cork stopper.
– the display stand is also supplied.

The specimens present no significant biological hazard (although I would strongly advise against ingesting them). they can be safely taken out of their tubes and handled – though, for longevity, it is advised they remain in their glass chambers the majority of the time.

I am initially making two sets available for sale – I do have a couple more full sets, but I don’t currently have display racks for them all (when I get new racks made, I’ll put these up for grabs too) 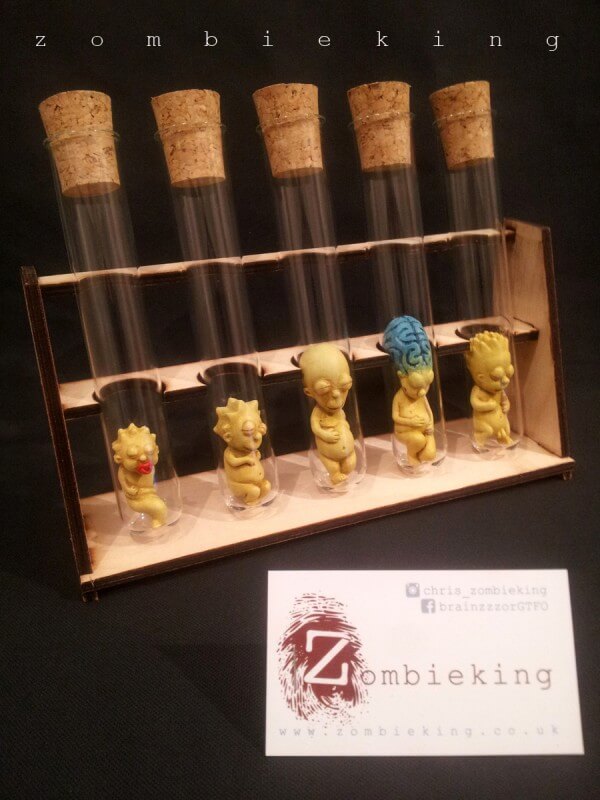 £45.00 for the SET. If these are sold out by the time of publishing please be patient for the next set or you can message Chris HERE and get yourself on the commison list. Tell him The Toy Chronicle sent you 🙂

We own a full set of the older Test Tube series and can’t speak highly enough about the quilty and price point from Chris and would recommend his work if you’re into absurd foetal specimens with the Simpsons twist.

You can check out the older Test Tube article HERE 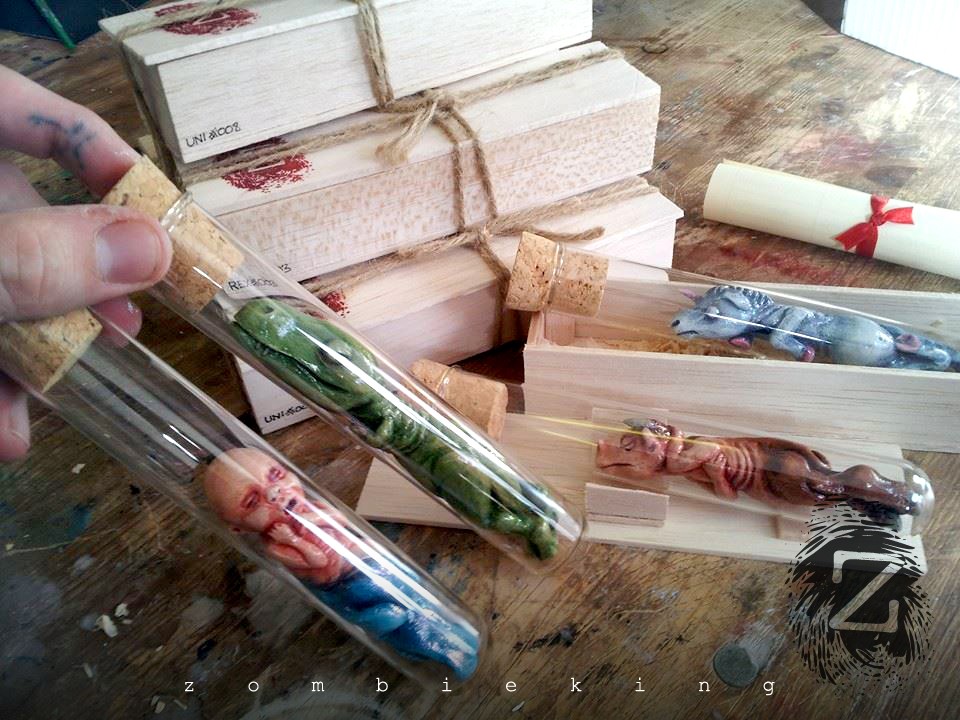 A few more words from Chris

‘the nuclear family’ was a piece of art I created for a Simpsons: Treehouse of Horror exhibition in Liverpool in 2016 – you can read a little more about this in a blogpost [here]

Their creation process is that I hand sculpted each family member. I then moulded, cast in resin, and hand painted them all. much love and attention are applied during each of these stages. Altogether, I made 10x of each family member and they were sold at the event both individually and as a set.

I do still have moulds for them, and I do have a desire to cast more bodies and heads (but purely in order to make some kinda mutated monstrosity! whether I ever get round to that is quite doubtful.) that said, I have no intention of remaking them again in this fashion so there will likely only ever be this limited number in existence.

the test tube display rack is designed by myself. it shows these things off in a rather nice fashion – as well as holding them securely in place. I learned how to use the laser cutter at a local makers club, then proceeded to design, cut and assemble the racks all by myself! (i cant even hammer a nail in straight – so after doing this I felt like a futuristic carpenter!)

and a note for anybody who has collected previous test tube babies. this set comes as seen -they do not have individual boxes, nor do the have birth certificates. what you see in the photos is what you get. 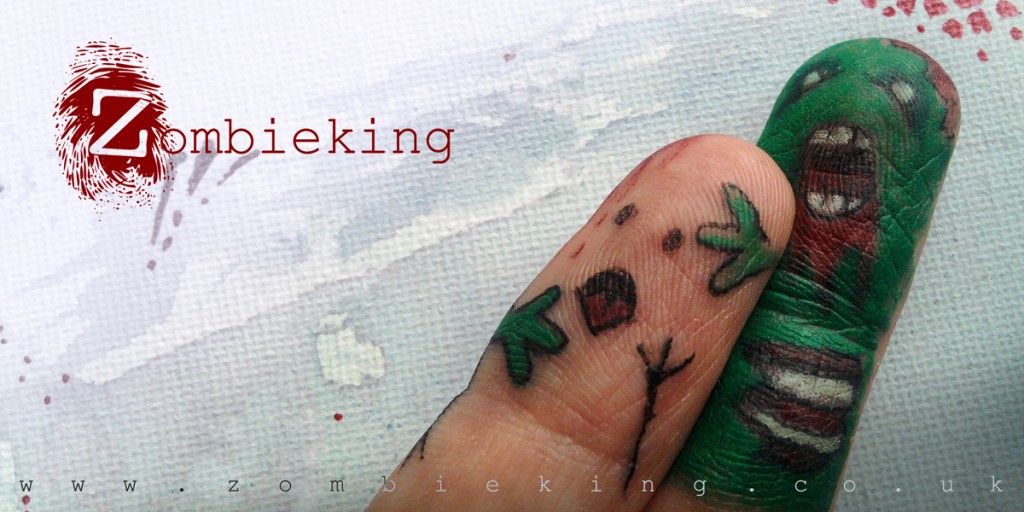 (info and photo lifted from http://zombieking.co.uk