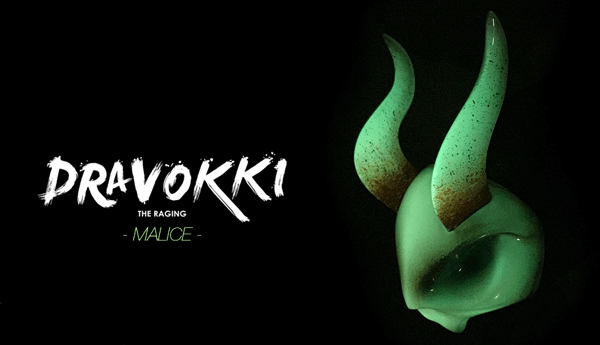 If you cast your minds back a few wee weeks you’ll recall we covered a fantastic resin release by WHALERABBIT. If you forget, it was called Dravokki – The Raging. Back in Mid-Jan, we didn’t really know much about the release, other than the resin figure looked bloody awesome. Today we received news of more details, but we also found out there will be a GID CHASE variant too! Dualle Dravokki Malice!

We know that Dravokki – The Raging will drop in early March (tentative 3rd March) and it will be limited to 100 pieces. The CHASE variant that we mentioned above (Malice) will be a 1 in 10 ratio and not only does the Malice mask look aces, it’s also GID FREAKIN’ GREEN too! Dravokki will come as a 6.5inch art collectable, with a mask (either Original or Malice). The set will also come with an art print too. Priced at $95/£77 which also includes worldwide registered shipping too.  We imagine that Dravokki won’t last long, considering how awesome he looks.

You can check out WHALERABBIT on Facebook, as well as checking out the creator VYNC on Facebook . You can also check out VYNC on Instagram too.