JT Studio’s surprise release at Taipei Toy Festival 2018 has now been confirmed for an online release!  YORU x YORU has been transformed from 1/6th scale high-end action figure into a full soft vinyl version. JT Studio’s “Street Mask” series heads to the vinyl direction and we have to say it’s not been toned down too much as both YORU x YORU vinyl edition has clothing and accessories to go with them both.

YOKU was born in a famous Ukiyo-E family in Kyoto, since young he got into playing yoyo and started his dream. Living by the Inari Shrine made YORU to constantly sneak out to practice in the shrine, while his skill improved faster than usual, which led him to believe that the Inari God has blessed him with the power to persuade his dream, thus making him to used a fox mask to act as his personal lucky charm. Never giving up on his path YORU joined the clan “Crazy D.”

YORU twin brother, since they were kids YOKU like doing the same thing as his older brother. Ever since YORU started yoyo, YOKU began learning along with YORU, but his skill was never a matched of and always below his brother, to a point where everyone thought YOKU was just a second-rate YORU, which causes YOKU to grew envy and hatred, that made “Night M.” to bring him into their clan. 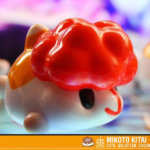 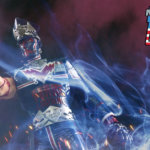